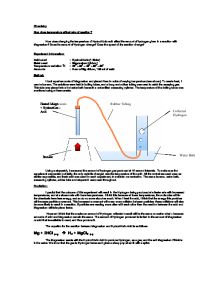 How does temperature affect rate of reaction?

Chemistry How does temperature affect rate of reaction? How does changing the temperature of Hydrochloric acid affect the amount of hydrogen given in a reaction with Magnesium? Does the amount of Hydrogen change? Does the speed of the reaction change? Experiment information: Acid used : Hydrochloric (1 Molar) Metal used : Magnesium (ribbon) Temperature variation 0C : 200 - 300 - 400 - 500 - 600 Amounts : 5 cm of Mg ribbon, 100 ml of acid Method: I took equal amounts of Magnesium and placed them in acids of varying temperature (see above). To create heat, I used a bunson. The solutions were held in boiling tubes, and a bung and rubber tubing was used to catch the escaping gas. This tube was placed into a hot water bath beneath a water-filled measuring cylinder. The temperature of the boiling tubes was monitored using a thermometer. Using a stopwatch, I measured the amount of hydrogen gas produced at 15 second intervals. To make sure the experiment was carried out fairly, the only variable changed was the temperature of the acid. ...read more.

We can also see how the reaction begins very rapidly, and then slows down and finally stops, as the curve inclines steeply at first and then levels out. Evaluation: The experiment was on the whole a success. However a lot of the data could have been more accurate: on the first results graph especially there was a lot of rogue data causing some of the curves to overlap. To improve the experiment I could have been more thorough in making sure there was no air in the gas cylinder, and that no Hydrogen escaped when the reaction first started. This was probably what caused only 48 ml of Hydrogen to be produced for one of the experiments (Results II at 300). I could also improved the way in which the Hydrogen gas was measured, possibly by doing it electronically. Human error in measuring off the amount of gas was probably what caused some of my results (mainly in the Results I, some in Results II) to be slightly nonconforming. Also, if I had taken measurements more frequently, say every 5 seconds, my graphs would be much more representative. ...read more.