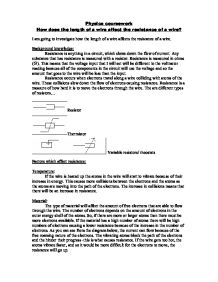 How does the length of a wire affect the resistance of a wire?

How does the length of a wire affect the resistance of a wire?

I am going to investigate how the length of a wire affects the resistance of a wire.

Resistance occurs when electrons travel along a wire colliding with atoms of the wire. These collisions slow down the flow of electrons causing resistance. Resistance is a measure of how hard it is to move the electrons through the wire. The are different types of resistors…

I predict that if the length increases then the resistance will also increase in proportion to the length. The reason is because the longer the wire the more atoms and so more likely the electrons are going to collide with the atoms. If the length doubles, the resistance should also double. If the number of atoms double, it will result to a larger chance of collisions slowing down the electrons increasing resistance. I also predict that at 2 volts, the resistance will be less than at 3 volts because the energy between the atoms shall be less so they will be moving around less. Resulting in fewer collisions between the flowing electrons and the atoms therefore it has less resistance. Resistance means the property of anything to constrict the flow of electrons. The electrons that carry energy within the metal collide with atoms inside the wire and change in direction. This is known as scattering. Scattering, causes electrical resistance. Therefore I can predict that the electrons will collide with the atoms, when the atoms have more energy, more often.

First of all gather your equipment, which are mentioned earlier. Check all safety precautions also mentioned earlier. When all safety is completely checked plug in the power pack into the socket. It is the power pack that will provide the set voltage. From the ammeter, a crocodile clip will be connected with the other end connected to the meter wire at 0cm. This will remain here, as it will simply be reading the current from this point whilst the wire from the voltmeter varies along the wire.

In the main test, I took three readings for each length; this allowed me to take an average value of resistance. The results from this test were more accurate then the preliminary ones, there were no obvious anomalous results but a few just came off the line of best fit.

We read directly over the meters to see where the needle was pointing so there is less chance of parallax error.  If we had read it looking from the left or right side, we may have read the wrong current and therefore we will work out the resistant incorrectly. We could have used digital meters as these will record the resistance to two decimal places and there would be no chance of making a parallax error.

If I were to do this experiment again, to achieve more precise results I would need to clean the crocodile clips to ensure that there is no rust on them. I would use a digital voltmeter and ammeter. Finally, I would lower the current to make sure that the wire does not burn, as this will affect the resistance; it will not be a fair test.

An alternative method would be to include a data logger, and using a computer as it would give me more accurate result. Also using digital voltmeters and ammeters.