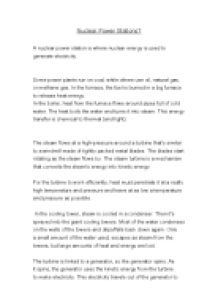 A nuclear power station is where nuclear energy is used to generate electricity.

Some power plants run on coal, while others use oil, natural gas, or methane gas. In the furnace, the fuel is burned in a big furnace to release heat energy.

In the boiler, heat from the furnace flows around pipes full of cold water. The heat boils the water and turns it into steam. This energy transfer is chemical to thermal (and light).

The steam flows at a high-pressure around a turbine that's similar to a windmill made of tightly packed metal blades. The blades start rotating as the steam flows by. The steam turbine is a mechanism that converts the steam's energy into kinetic energy.

After this, Pylons carry electricity at extremely high voltages, through overhead cables, to wherever it’s needed. Next comes the step down transformer; once the electricity gets to its destination, another transformer converts the electricity back to a lower voltage safe for homes to use. From here, the electricity flows through under ground cables to homes for use.

They are concerned about the radioactive fuel it needs. There are also some questions that need to be answered about the storage of radioactive waste produced through using nuclear power. Some of the waste remains dangerous for thousands of years and is currently stored in places such as deep caves and mines. Many people living near nuclear power stations or waste storage depots are scared about nuclear accidents and radioactive leaks.

But there are not only disadvantages.

There are both pros and cons of building nuclear power stations, concerning health, the environment and the economy. One usually leads to another, for example; when the environment is being damaged by radioactivity, people’s health is affected, which then leads to money being spent on medication and expensive treatments. Plus people normally would try to move as far away as possible away from the area with radioactivity causing inconvenience for a lot of people.