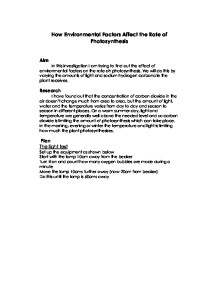 How Environmental Factors Affect the Rate of Photosynthesis

How Environmental Factors Affect the Rate of Photosynthesis Aim In this investigation I am trying to find out the effect of environmental factors on the rate oh photosynthesis. We will do this by varying the amounts of light and sodium hydrogen carbonate the plant receives. Research I have found out that the concentration of carbon dioxide in the air doesn't change much from area to area, but the amount of light, water and the temperature varies from day to day and season to season in different places. On a warm summer day, light and temperature are generally well above the needed level and so carbon dioxide is limiting the amount of photosynthesis which can take place. In the morning, evening or winter the temperature and light is limiting how much the plant photosynthesises. Plan The light test Set up the equipment as shown below Start with the lamp 10cm away from the beaker Turn it on and count how many oxygen bubbles are made during a minute Move the lamp 10cms further away (now 20cm from beaker) ...read more.

Sodium hydrogen carbonate (baking powder) This will be used to record how the amount of sodium hydrogen carbonate used will affect the plants rate of photosynthesis. Scales We will use these to measure the amounts of baking powder we are using. Fair Test This will be made a fair test by the fact that when doing the sodium hydrogen carbonate test the lamp will always be 5cm away, so that this won't be affecting the rate of photosynthesis as well. We will repeat the light test 2 times so that we make sure it is being done properly. We will use different people within our group to do different tasks so that it is timed and carried out accurately. Prediction I predict that as the lamp is moved away from the beaker less oxygen bubbles will be produced. I think this because photosynthesis needs light to take place and if the bulb is closer the intensity of the light is greater so the plant will have more energy to photosynthesise. ...read more.

See attached sheets Conclusion My results show that as more sodium hydrogen carbonate is added the Elodea gives off more oxygen bubbles because carbon dioxide is needed for photosynthesis. As the lamp is moved farther away less oxygen bubbles are given off because intense amounts of light are needed for the plant to photosynthesise, though at a certain point I don't think the plant would photosynthesise any more even if it was given more light because there wouldn't be enough carbon dioxide around to let it photosynthesise. Evaluation If I was going to do the experiment again then I would have done the sodium hydrogen carbonate test more than once to get more accurate results. I may also use a different method to obtain the results, for example I might do it using the apparatus and set up shown below. I may also have some way of putting carbon dioxide in the air because the amount the plant is photosynthesising may be limited by not enough carbon dioxide even though there is plenty of light. ...read more.