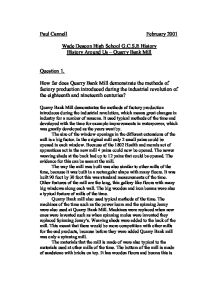 How far does Quarry Bank Mill demonstrate the methods of factory production introduced during the industrial revolution of the eighteenth and nineteenth centuries?

Paul Cannell February 2001 Wade Deacon High School G.C.S.E History History Around Us - Quarry Bank Mill Question 1. How far does Quarry Bank Mill demonstrate the methods of factory production introduced during the industrial revolution of the eighteenth and nineteenth centuries? Quarry Bank Mill demonstrates the methods of factory production introduces during the industrial revolution, which means great changes in industry for a number of reasons. It used typical methods of the time and developed with the time for example improvements in waterpower, which was greatly developed as the years went by. The size of the window openings in the different extensions of the mill is a big factor. In the original mill only 2 small pains could be opened in each window. Because of the 1802 Health and morals act of apprentices act in the new mill 4 pains could now be opened. ...read more.

Weaving sheds were added to the back of the mill. This meant that there would be more competition with other mills for the end products, because before they were added Quarry Bank mill was only a spinning mill. The materials that the mill is made of were also typical to the materials used at other mills of the time. The bottom of the mill is made of sandstone with bricks on top. It has wooden floors and beams this is also typical of mills at the time. Each Floor was powered by a drive shaft in the middle this is the same as in other mills of the time. All the machines would be connected by a belt to the drive shaft and powered by this. The mill also has long metal beams from wall to wall from the outside to stop it falling down by the force of the machines this was typical of mills of the time. ...read more.

As waterpower was improved better water wheels were added to the mill. A weir was built to increase the drop in water. A weir lets water over the top of it and down in to the headrace. A millpond was also built to store water so that it could be let out over the headrace when needed. Other mills also tried to improve on how fast they could turn the wheel by developing waterpower. When the steam engine was invented one was installed at Quarry Bank mill. This was used when the water level was too low to turn 'The great iron wheel.' This was added when the new mill was built one of the many extensions. The new mill was built to accommodate this large wheel. It was built with an unusual Mansard roof. It was built in this way to provide a usable attic space, which was mainly used for storage. Quarry Bank mill is a good representative of a typical mill of its time. It used all the modern methods of making cloth. ...read more.