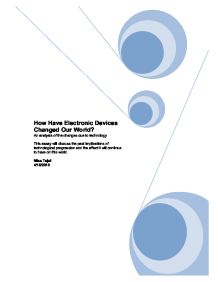 How have electronic devices changed our world?

One World Essay: How Have Electronic Devices Changed Our World?

Technology is neither good nor bad, nor even neutral. Technology is one part of the complex of relationships that people form with each other and the world around them; it simply cannot be understood outside of that concept - Samuel Collins, a doctor in the 17th Century[1].

The topic of this essay is electronic gadgets and the impact they have had on our lives. This essay will discuss both the positive and negative aspects of this controversial topic and whether it will lead us to prosperity or devastation, success or downfall. In this country and other developed countries, technology is a part of our everyday lives. We are surrounded by machines and technological articles, but is it a curse or a blessing? Like every other scientific progression, technology has changed the world, but whether it is for the best of our planet or the worst is yet to be decided.

It also holds a portal to affecting social societies. Facebook. Bebo. Myspace. Etc.  All of these are popular social networking sites designed to help friends and family keep in touch. Though all of these websites do achieve their goal, there is always a price to pay. Teenagers often have competitions with the amount of contacts they have, and in a bid to win this contest they may add random strangers with whom they have no relation or connection [6]. This can get dangerous very quickly as demonstrated in the latest case of murder. Mr Peter Chapman led a young girl named Ashleigh Hall to believe he was in love with her all through their internet connections, he then met her and proceeded to rape then kill her [7]. This is not the only social fault, research has also shown that these types of social networking sites depletes your social skills and also wavers your focus and concentration when doing other things such as homework; this is why schools and government buildings block access [8]. 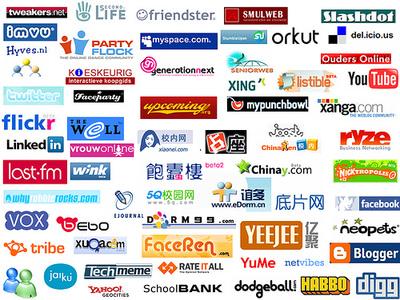 The world looks to England as an economic example as we have a history of a thriving economy. Recession has taken its toll but our economy still stands to value. Technology often