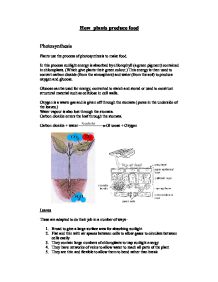 Plants use the process of photosynthesis to make food.

In this process sunlight energy is absorbed by chlorophyll (a green pigment) contained in chloroplasts. (Which give plants their green colour.) This energy is then used to convert carbon dioxide (from the atmosphere) and water (from the soil) to produce oxygen and glucose.

Glucose can be used for energy, converted to starch and stored or used to construct structural material such as cellulose in cell walls.

Oxygen is a waste gas and is given off through the stomata ( pores in the underside of the leaves.)

Water vapour is also lost through the stomata.

Carbon dioxide enters the leaf through the stomata. 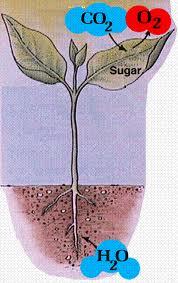 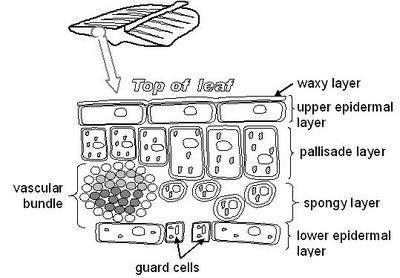 Anything that slows photosynthesis is a limiting factor, since plants need carbon dioxide and light and require warmth for reactions to occur these can all be limiting factors.

A lack of light means there is not enough energy for photosynthesis to proceed. 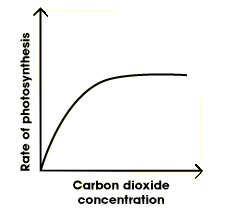 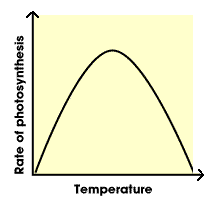 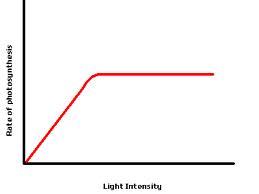 In the shade, evening, early morning or winter light or temperature might be limiting. (Sun low in the sky) During the day when there is no wind carbon dioxide may be limiting (because the air surrounding the plant will have its carbon dioxide used up by the plant).

The glucose was produced during photosynthesis

The oxygen is taken in through stomata

Carbon dioxide is given off as a waste gas

The energy is used to build large molecules needed by the plant from smaller ones ie glucose into starch or amino acids from nitrates and sugars.

Plants need to transport substances from one place to another ie water from the roots to the leaves and glucose from the leaves to the roots.

Special tissues are responsible for this- 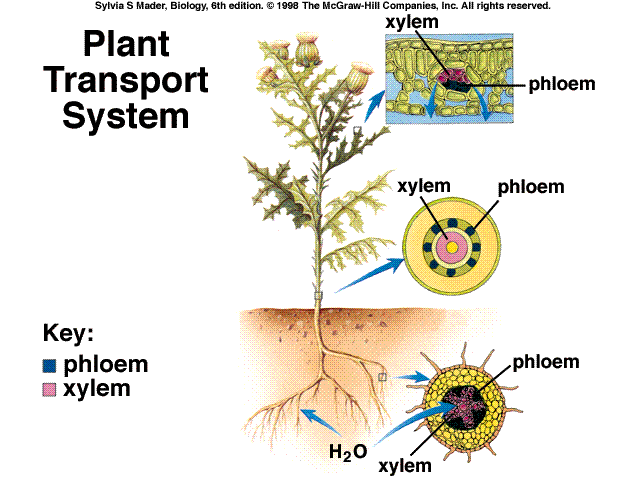 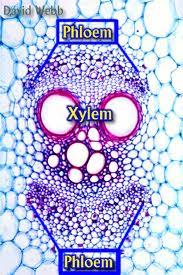 Glucose is soluble in water and so cannot be stored by the plant. A high concentration of glucose would cause water to move towards it by osmosis and this would disrupt the balance of water within the plant. Instead it is converted into starch which is insoluble and stored tubers and bulbs ie carrots and potatoes.

Photosynthesis produces the energy that plants need but they also need minerals in small amounts for making amino acids to make proteins or magnesium to make chlorophyll for photosynthesis.

The suns solar energy is converted into glucose (chemical energy) Glucose can be immediately used for energy within the plant or used to make cellulose.

Glucose can be converted to starch or oils for storage.

Glucose can be used along with nitrates (dissolved in soil water and taken in through the roots) and used to make proteins.

Exam questions in this topic often focus on factors effecting plant growth. You need to know the photosynthesis equation as a way of remembering what the process needs and what it produces. Experiments measuring photosynthesis will measure what is needed (carbon dioxide, light warmth) or what is produced (glucose, oxygen).

In questions showing or describing a situation affecting plant growth the above factors should be considered with respect to the environment described, (light levels-shade etc), (CO2 levels- how close the plants are to each other, wind etc), (warmth-position of the sun, time of day/year etc )  but don’t forget the need for minerals and the effects of pollution, drainage etc.