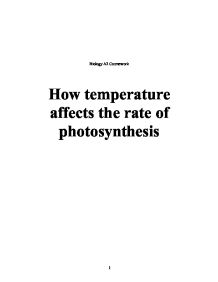 How temperature affects the rate of photosynthesis.

Biology A2 Coursework How temperature affects the rate of photosynthesis Contents: Title: Page number: Abstract Introduction Preliminary experiment Aim Prediction Apparatus Diagram Method Key variables Safety Results Graph (individual) Graph (class) Statistical analysis (t-test) Conclusion Discussion Evaluation Bibliography Abstract: The aim of the experiment was to observe and analyse the affect of temperature on the rate of photosynthesis. This rate was measured by the rate of oxygen produced (mm3/min), by a photosynthesising plant (elodea), under different temperatures. A specialised apparatus called a potometer was used to observe this affect. A certain length of elodea (50mm) was cut at a slant at one end, and was placed in a test tube and was immersed in the pondweed water it was accustomed to. The cut end of the elodea was attached to a delivery tube which was connected to a measuring tube which was further attached to a syringe by rubber tubing. This whole apparatus (the potometer) was then placed in varying temperatures to measure the affect of the temperatures on the rate of oxygen production. For each temperature the length of the oxygen bubble released by the plant was measured by pulling it into the measuring tube of the potometer by using the syringe. This length was recorded and converted to the rate of oxygen produced by the plant per minute under that temperature (mm3/min). The same elodea was used to perform the experiment under the same temperature three times all together i.e. there were three repeats for each temperature. The temperatures used were: 0 oC, 15 oC, 25oC, 35 oC, 45 oC, 55oC, and 65 oC. Many factors affect the rate of photosynthesis mainly carbon dioxide concentration (controlling the rate of the Calvin cycle), light intensity (Affecting the light stage) and temperature (affecting the kinetic energy of all the molecules, including enzymes involved in the photosynthetic reactions and reducing the rate of photosynthesis by denaturing the enzymes after a certain temperature). ...read more.