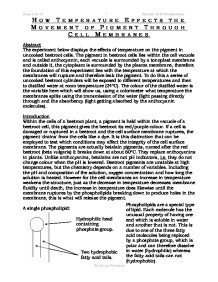 How Temperature Effects the Movement of Pigment Through Cell Membranes

HOW TEMPERATURE EFFECTS THE MOVEMENT OF PIGMENT THROUGH CELL MEMBRANES Abstract The experiment below displays the effects of temperature on the pigment in uncooked beetroot cells. The pigment in beetroot cells lies within the cell vacuole and is called anthocyanin, each vacuole is surrounded by a tonoplast membrane and outside it, the cytoplasm is surrounded by the plasma membrane, therefore the foundation of this experiment lies with the temperature at which the membranes will rupture and therefore leak the pigment. To do this a series of uncooked beetroot cylinders will be exposed to different temperatures and then to distilled water at room temperature (24�C). The colour of the distilled water is the variable here which will show us, using a colorimeter what temperature the membranes splits using the transmission of the water (light passing directly through and the absorbency (light getting absorbed by the anthocyanin molecules). Introduction Within the cells of a beetroot plant, a pigment is held within the vacuole of a beetroot cell, this pigment gives the beetroot its red/purple colour. If a cell is damaged or ruptured in a beetroot and the cell surface membrane ruptures, the pigment 'drains' from the cells like a dye. It is this distinction that can be employed to test which conditions may affect the integrity of the cell surface membrane. The pigments are actually betalain pigments, named after the red beetroot (beta vulgaris) it breaks down at about 60�C. They replace anthocyanins in plants. Unlike anthocyanins, betalains are not pH indicators, i.e. they do not change colour when the pH is lowered. Beetroot pigments are unstable at high temperatures, but the chemistry depends on a number of variables. Including the pH and composition of the solution, oxygen concentration and how long the solution is heated. However for the cell membranes an increase in temperature weakens the structure, just as the decrease in temperature decreases membrane fluidity until death, the increase in temperature does likewise until the membrane ruptures by the phospholipids breaking down to produce holes in the membrane, this is what will release the pigment. ...read more.

There were also certain limitations which made this experiment a little harder than it could have been, for example keeping the temperature at a steady rate was incredibly difficult as the water kept on cooling, an answer to this problem would be the use of water baths at the temperatures required this would have meant that the temperature error measurement would have been minimal and focusing on an exact temperature would have been made possible. This would have given better results and a completely reliable and accurate answer to the problem at hand. The problem with the Bunsen burners as the temperature regulators, was that if we were to put the beetroot, already in the distilled water, over the flame for a period of time for the minute required, the temperature would have changed significantly and so disrupted the results accordingly. Another problem lay with the beetroots themselves, this was that the beetroots used were very small and so getting larger cylinders of the beetroot was very difficult, therefore we had to endeavour with smaller pieces, if larger beetroots were used and larger cylinders created, the experiment would have been made fairer as we could have had a larger view over the actions of the beetroot's membranes during heating. The validity of the data can be questioned as the temperature fluctuations during the test were certainly the biggest limiting factor and so had a substantial effect upon the evaluation. Objections made are to the limitations of available apparatus that would have helped to create a better environment for the beetroots and thus giving a much more accurate result. Moreover the experiment was sufficient as it gave the answer to the problem, this was that the transition temperature for this relationship was 59�C where the cell surface membranes of the beetroot cells seriously began to rupture and so leaked, from its vacuole, the red pigment anthocyanin, there was a good relationship between the pre-test, the actual experiments and the scientific research done on the topic and so we can safely presume that it is correct. ...read more.