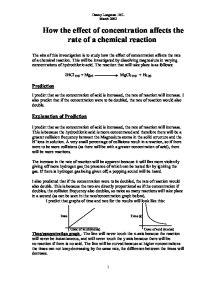 Number of moles of magnesium = (100 / 1000) x (1 / 2) * Mass / Ar = Number of moles Mass of Magnesium = 24 (the Ar ) x ( (100 / 1000) x (1 / 2) ) = 1.2g (20cm of Magnesium has a mass of 0.18g - with a defined width) 20cm = 0.18g ( x 6.66) 133.33cm = 1.2g The above calculation has shown that 133cm of magnesium will dissolve in 1Mole Hydrochloric acid. This means that the 1cm lengths used in the experiment will easily dissolve in the acid. Obtaining Evidence The following method was used when performing the experiment: 1. Measure out a defined volume of 2M Hydrochloric acid into a measuring cylinder using a dropping pipette. The level should be read from the bottom of the meniscus and should be read at eye-level with the measuring cylinder on a level surface. This ensures that the exact amount of acid is used every time so the results will be more accurate. 2. If the concentration of acid being used is not 2M acid, a defined volume of water will need to be added to the acid. To find the volume of water needed use the following calculation: 3. Volume of water = 100cm3 - Volume of acid. 4. Pour the liquid into a beaker and measure the temperature of the solution using a thermometer. Record the temperature, the temperature should be the same for every test because if the temperature is increased, the ions have more kinetic energy so will move around faster resulting in harder collisions and more frequent collisions with the Magnesium atoms. This would affect the results. 5. Measure 1cm length of magnesium, and re-measure it before cutting. It is important that the length is exact as the length of Magnesium is a constant in the experiment. 6. Wipe the magnesium with iron wool to remove the oxide layer that will have formed when the magnesium was exposed to the air prior to the experiment. ...read more.

Testing each concentration of Hydrochloric acid two or three times and then calculating the mean average could improve the results. Testing the concentrations in 0.1M increments would give a greater fluidity to the graph line, and would enable the prediction of results for concentrations not yet tested by being able to calculate a more accurate formula for the line. Conclusion My results prove beyond doubt that as the concentration of the acid increases, the time taken for the reaction decreases. For example, my results show that the time taken is 99, 45, 24, 16, 12 and 10s when the concentration of Hydrochloric acid is increased. The results are good enough to support a firm conclusion because they all follow the trend of the time for the reaction decreasing as the concentration of acid increases, and they are all very close to the line of best fit. However, if more concentrations were to be tested, a greater range of results could be recorded, so the results would support the conclusion even more strongly. The results are very reliable because they can all be explained using science. Even if a person with no knowledge of science at all were to view the results, he would say that they are accurate because of their being in very close proximity to the line of best fit. This shows that the results are consistent, which adds to their reliability. Further Work There are numerous ways of obtaining more evidence for the conclusion or extending the investigation. Some of these ways are as follows: 1. Carry out the experiment using a different acid, for example H2SO4 (sulphuric acid) or H2NO3 (nitric acid). Will the results be the same as for Hydrochloric acid? 2. Carry out the experiment for a different group 2 alkali earth metal, for example Calcium (Ca) or Barium (Ba). Will the results be the same as for Magnesium? 3. Carry out the experiment at a different temperature. Will the times for the various reactions be faster or slower than at 20?C? Danny Longman 10JL March 2002 2 ...read more.