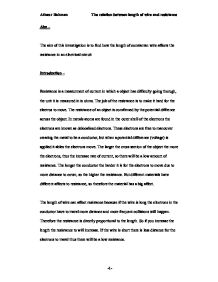 Resistance is a measurment of current in which a object has difficulty going thorugh, the unit it is measured in is ohms. The job of the resistance is to make it hard for the electros to move. The resistance of an object is comfirmed by the potential diffrence across the object. In metals atoms are found in the outer shell of the electrons the electrons are known as delocalised electrons. These electrons are free to manouver creating the metal to be a conductor, but when a potential difference (voltage) is applied it ables the electrons move. The larger the cross section of the object the more the electrons, thus the increase rate of current, so there will be a low amount of resistance. The longer the conductor the harder it is for the electrons to move due to more distance to cover, so the higher the resistance. But different materials have different affects to resistance, so therefore the material has a big affect.

Width of wire can have dramatic affect towards resistance, which is because the width is inversely proportional to resistance; therefore if you increase the width the resistance will decrease. Because there will be more space for the electrons to move around this should therefore decrease the amount of collisions. But if the wire is thin the opposite reaction will happen, less space the increase rate of resistance.

Temperature has a big impact upon resistance whether the wire is hot or cold; if the wire is cold the atoms in the wire move around slowly, it also means the wire will have a low resistance. However if the wire gradually get hot this increases the movement inside the wire, causing more collision and it is likely the conductor will have a high resistance.

I have analysed that there are four factors which can affect resistance length, width, temperature and material of the conductor have difftent affects towards resistance. In the experiment I will be test out the relation between the length of constantan wire and how it affects resistance.

Resistance is can be calculated by using R= V/I where R is resistance, V is voltage and I is current.

In this experiment the following equipment was used: 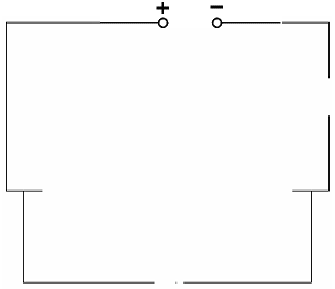 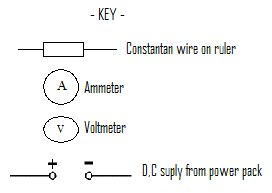 In this experiment I predict that the longer the length of wire the greater the resistance. This happens because the positive ions in the constantan wire have no space to move around and the wire is long so it takes time for the electron to manoeuvre. But if the wire is shorter it will have less resistance and space hence allowing the electrons to travel around easily in less time.

Resistance is when it makes it more difficult for electrons to get round a circuit, but the greater the resistance the more voltage needed to push the current through the wire, resistance happens when:

Resistance can be calculated by the following formula:

Current through the wire (I)

The ohms law is relationships among voltage, current, and resistance as follows:

What do I keep the same?

What did I change?

How did I ensure a fair test?

To ensure the experiment was fair I decided to have the same length of wire 100cm. I also kept the same amount of voltage entering the circuit which was five volts in the power pack. When moving the crocodile clip every 10cm after getting the ammeter and voltage reading I switched off the power pack so the wire does not get burnt. This gives us sufficient amount of time change the distance.

Overall the results went rather well most of the graphs have a strong correlation it shows that my prediction was correct, the longer the wire the greater the resistance. However if longer wires do no not have a high resistance the plots on the graph would have been everywhere and it would have been a negative correlation. I have taken notice in most the graphs that when results of the voltmeter increases the current in the ammeter decreases. This is because the increased resistance reduces the amount of current flowing in the circuit. The greater the resistance the greater the electrical push needed. I decided to do the experiment seven times this is because I wanted a good average result. If I repeated the experiment 1- 3 times there is a chance of the experiment being a fluke so by me doing the experiment seven times I reduce the possibility of any fluky results. I calculated my averages by adding all my voltmeter readings and ammeter readings and dividing the answer by how many times I done the experiments for each length, which so happened to be seven. For e.g. 1.95+ 1.96+1.99+2.03+2.10+2.14+2.72=answer/7 is for 10cm voltmeter reading. Once I done this I was able to do my ammeter reading before I calculated the average resistance for 10cm constantan wire. I also took notice that every time I repeated the experiment for all my voltmeter lengths the readings increased this shows that the temperature must have increased in the wire. 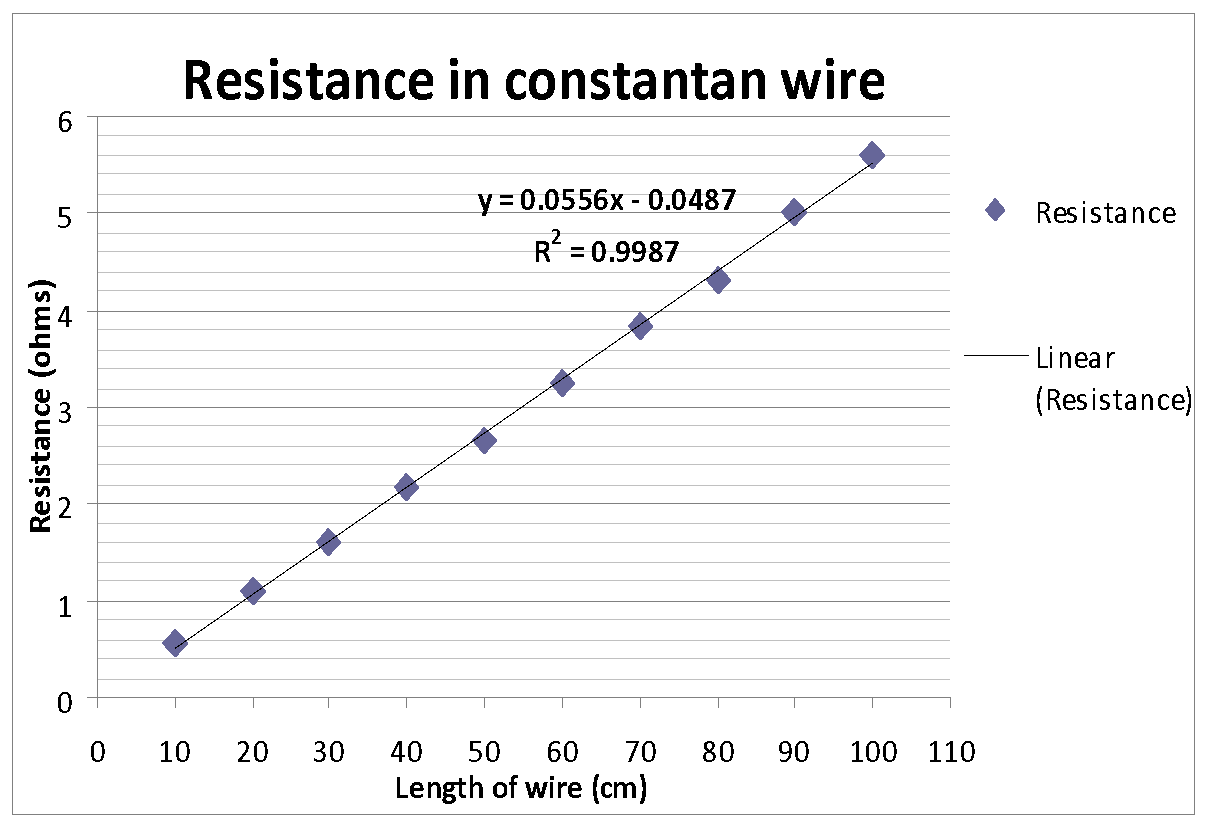 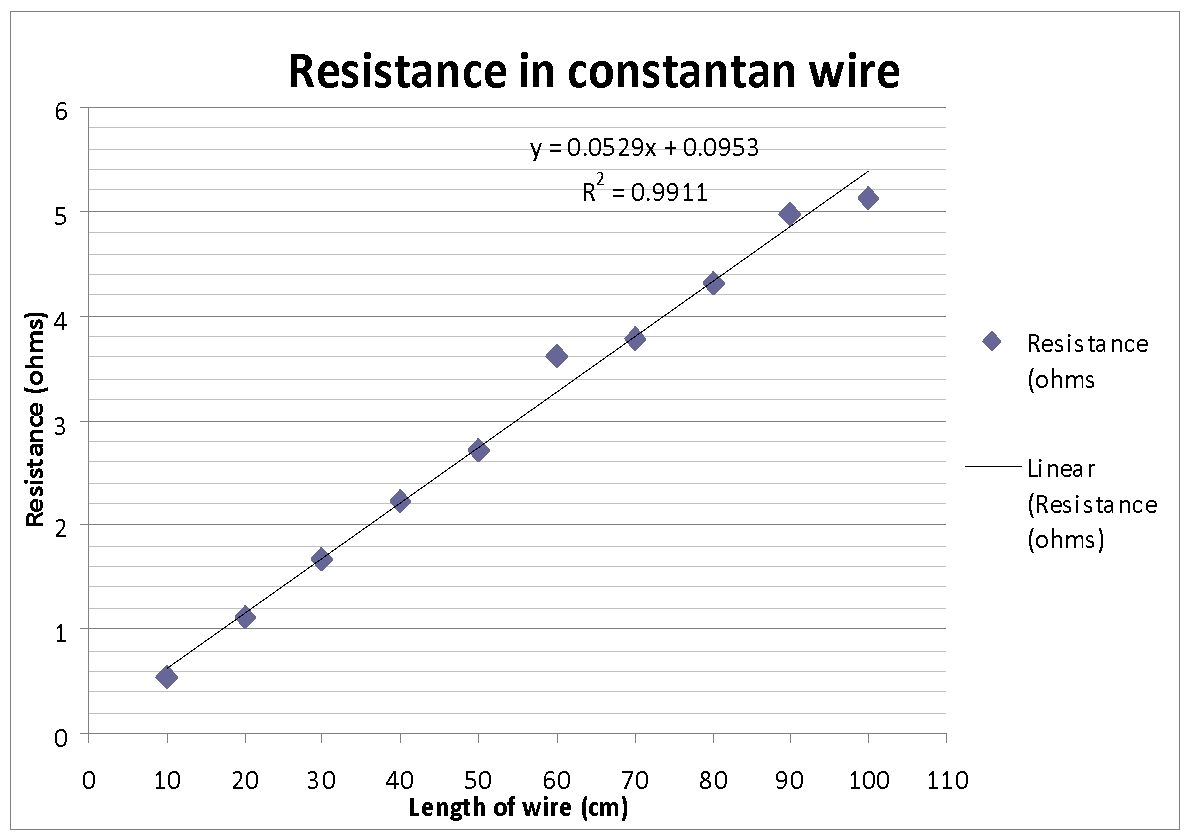 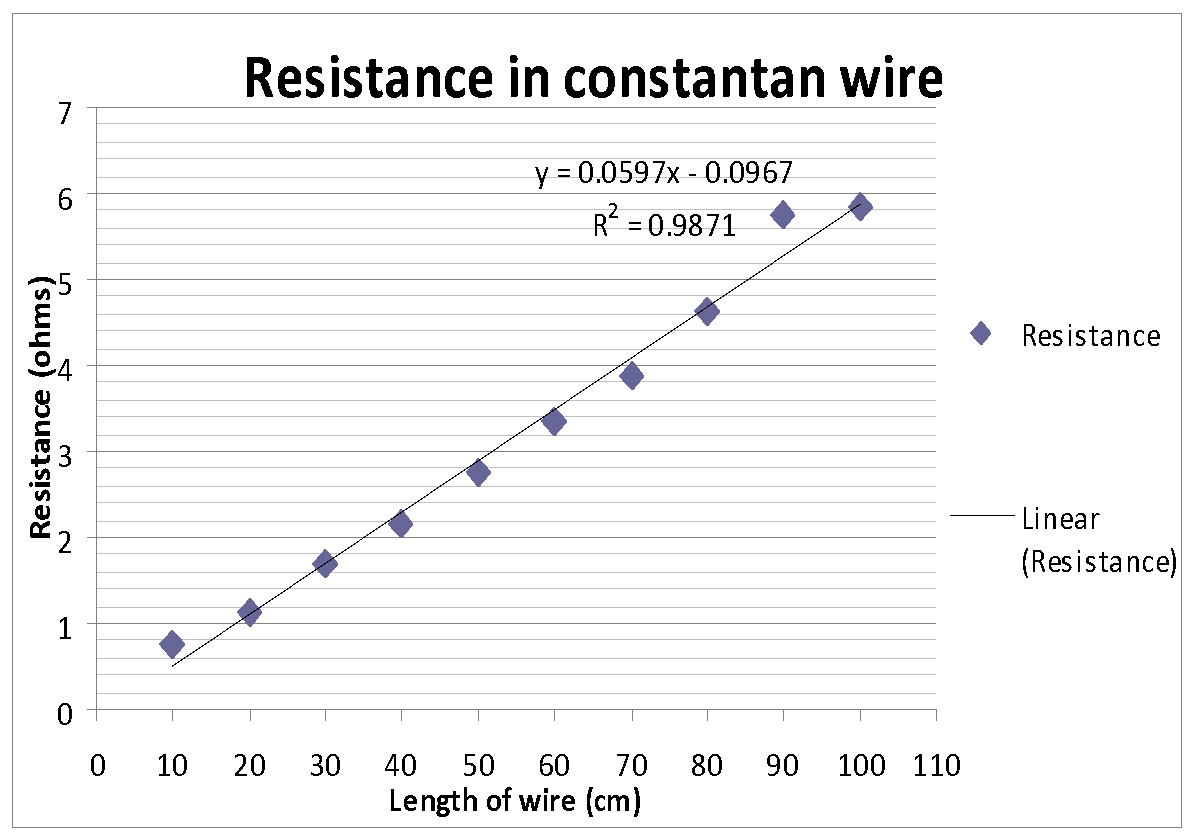 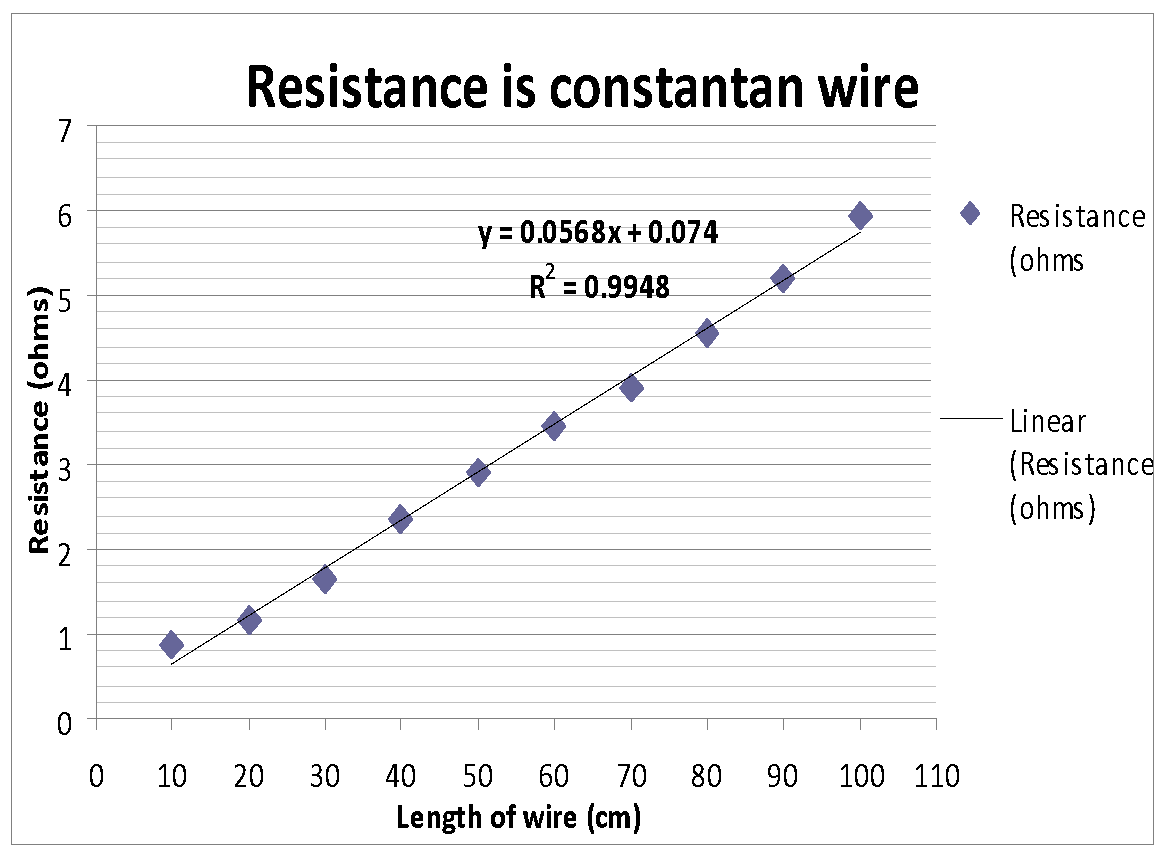 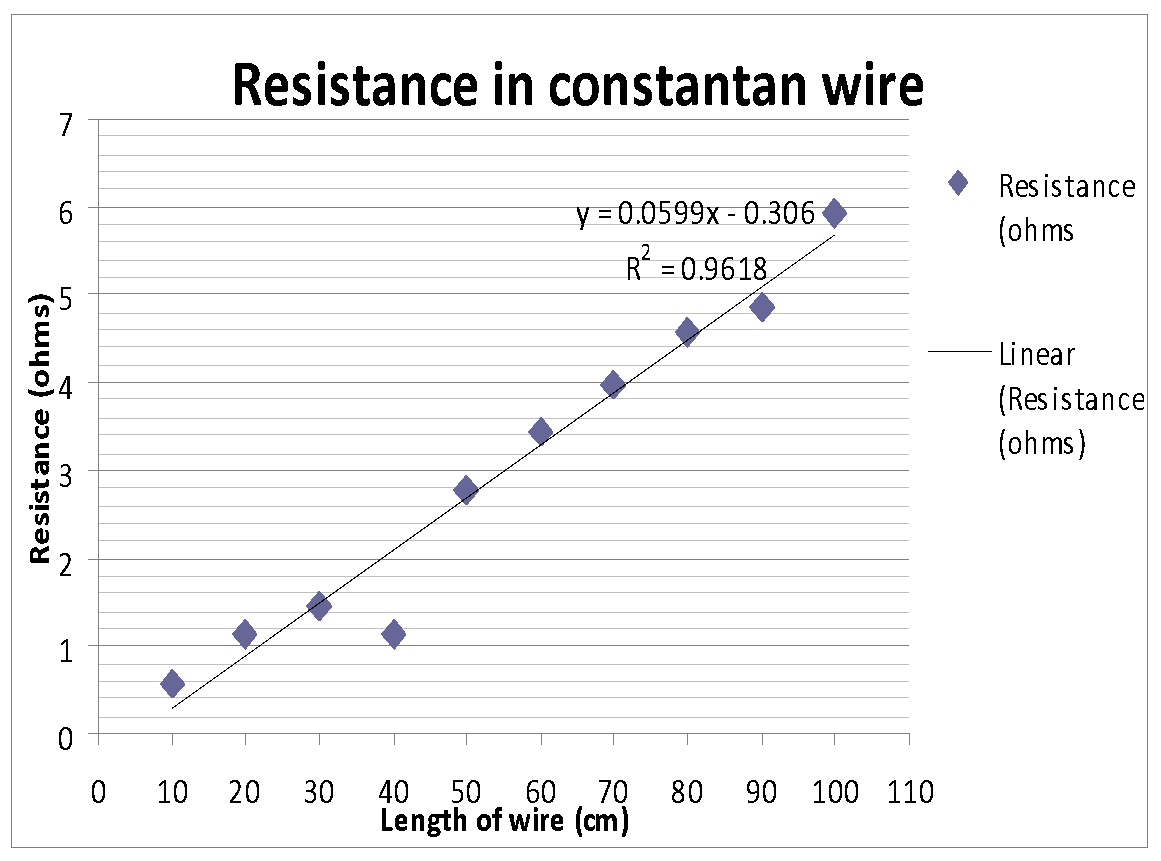 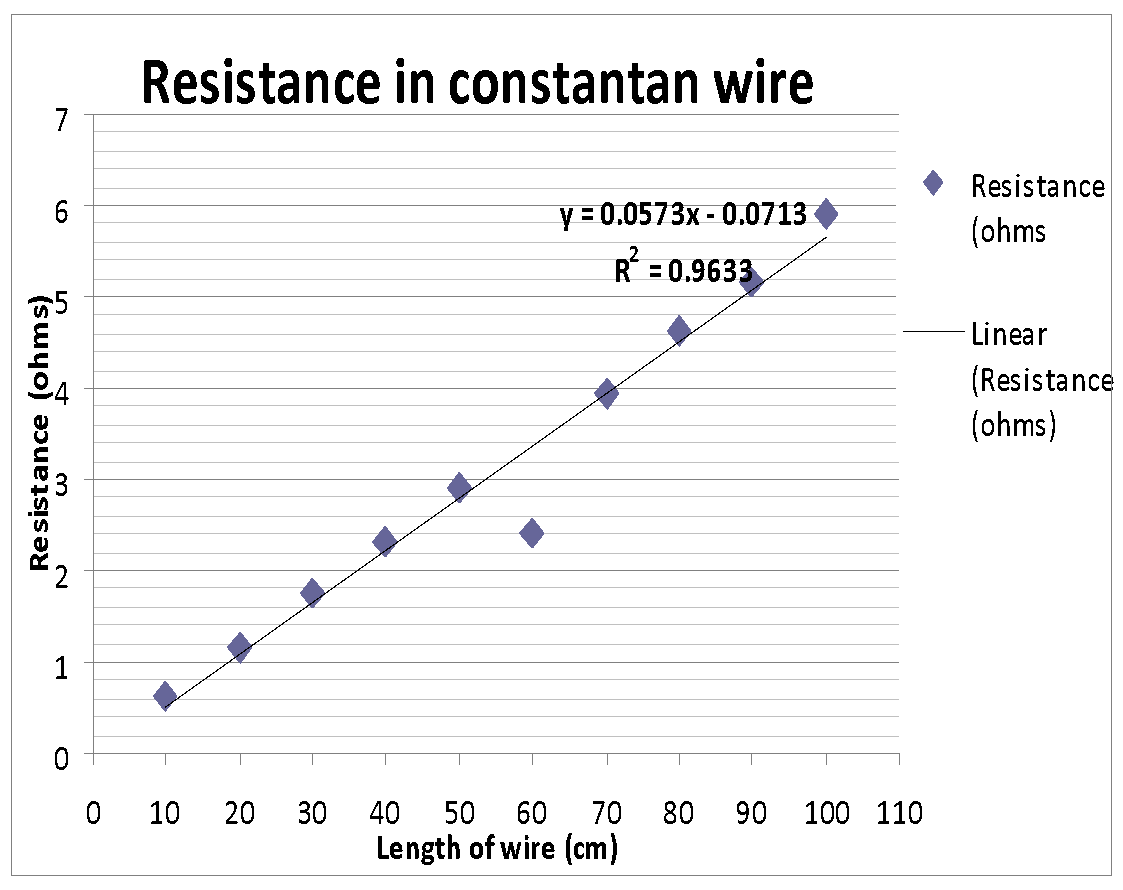 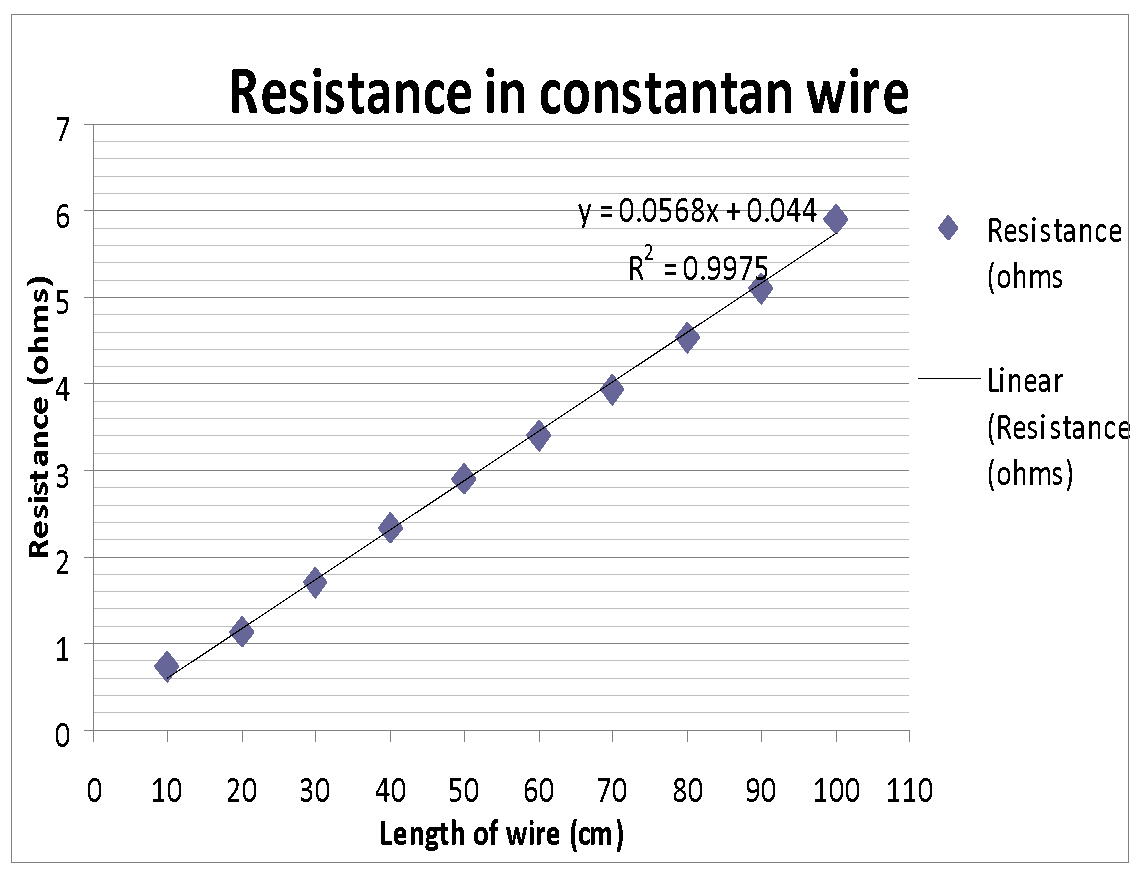 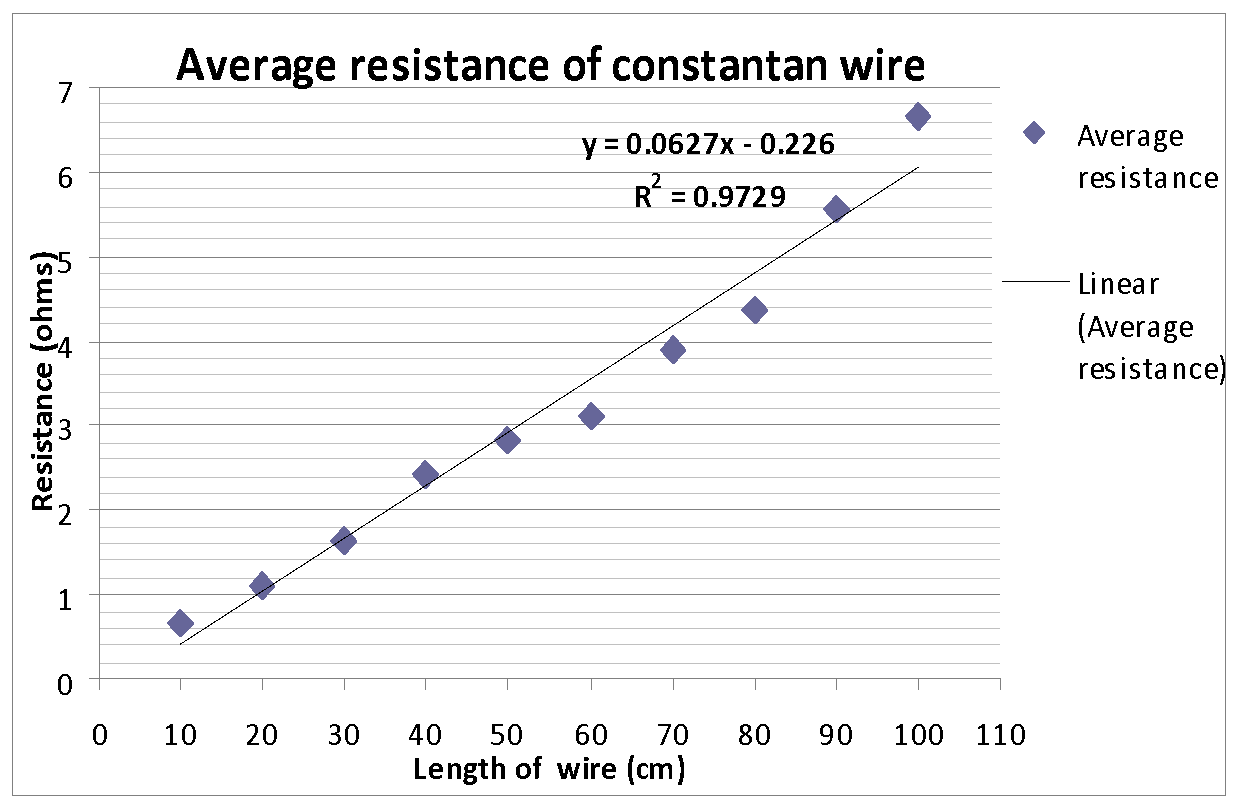 The type of wire makes a difference because the electrons have to pass through the material. These electrons may find it easier to pass through some materials than others e.g. Nichrome, Copper and Iron etc. Also the length of the wire will make a difference. This is because when you have a long wire, the electrons have to squeeze together to pass through the wire than they do in perhaps shorter wire. The diameter of wire affects the resistance. This is because if the wire was thin electrons will find it hard to go through, and are most likely to bump into each other. However if the wire was thick the electrons will have more space and are less likely to bump into each. Lastly the temperature of wire affects the rate of reaction because when the wire is cold the protons are not vibrating that much leaving electron to go pass more freely. If the wire however heats up the protons start to vibrate which disturbs the electrons flow of movement. This means the higher the temperature, the higher the resistance.

There were a few awkward results this could have been because the wires were not measured exactly to the right size or the reading on the ammeter and voltmeter was not accurate. Also if I had the chance to repeat the experiment I would reduced the power on the power pack. This is because the wires might have been over-heated as this will affect the resistance. Hot wires have a higher resistance then cold wires.

[1]2Short thick wires have less resistance and more space so it is easier for electrons and positive ions to move around.

[2]1Longer thin have higher resistance and less space so it is harder for electrons and positive ions to move around.