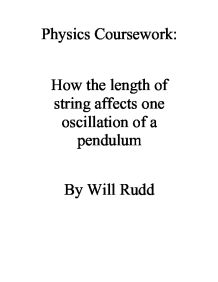 How the length of string affects one oscillation of a pendulum.

Physics Coursework: How the length of string affects one oscillation of a pendulum By Will Rudd How the length of string affects one oscillation of a pendulum Plan: In my investigation I will try to find out what affects the oscillation of a pendulum, I will try to quickly and simply work out what could actually be a variable. I already know that the period (the time taken for the pendulum to swing there and back) is the dependent variable, meaning that it's dependant on the other variables, the only possible variables are: * Weight/mass of the pendulum, * Distance that the pendulum is pulled back and * Length of the string To find out which of these variables could effect the period I carried out a short series of preliminary tests. Weight/Mass: For the weight/mass, the distance pulled back is 30cm and too keep the constant the string must remain the same length, hence the only variable that I changed was the weight by adding 50g, making sure this is a fair test. I allowed the pendulum to oscillate 10 times and then divided the time by 10 to work out the average oscillation time, I repeated each test twice and then worked out the average. These were my results: Mass (in grams) Time taken for ten periods/oscillations (in seconds) Test 1 Test 2 Average 50 14.38 14.37 14.375 100 14.32 14.58 14.450 150 14.06 14.40 14.230 From this test just using a human eye and a simple stopwatch, the numbers for the different weights (50, 100, 150) ...read more.

as well as the distance the string is pulled back (if the distance that the string is pulled back is doubled so is it's GPE) I want my results to be as accurate as possible but using the available equipment, it will be hard to have a complete degree of accuracy. In my investigation I will be using: * A clamp * Length of string * Ten gram weights (x5) * A stopwatch * A protractor * A one-meter rule and * A weight holder. I will set out the apparatus as below: Safety will not really be a big issue in these sets of experiments, but I will still keep a safe distance from the pendulum when it is swinging. This is the only real safety precaution I will need to take. Now that I have worked out which variable I will be using, I will simply follow the steps that I took when carrying out my preliminary test but make sure I take more time and they are more accurate. I will be measuring the time taken for 10 oscillations and then divide the time taken by 10, giving me the time for one oscillation. I will repeat each test twice and then work out the average. To keep my tests fair I will only change the length of the string. I will be using the human eye and a simple stopwatch (goes to 2.d.p) ...read more.

The first of the two problems was, the way in which I had tied the knot on. This resulted in the pendulum (instead of swinging in a straight line) it slightly veered to the left, if doing the experiment again I would simply clamp the string in horizontally stopping the shorting and lengthening of the piece of string. The second problem that I encountered was the momentum of the pendulum rocked the clamp. To counteract this I would have simply added weights to the bottom of the clamp. Another mistake that could have caused the anomalous result/s if that I only measured the string before I had attached it to the clamp, causing a tightening and loosening of the string. I chose the best-suited apparatus i.e. I used the most accurate stopwatch available etc. I repeated each test 3 times to clear up anomalous results, and for my preliminary results I felt that 3 results would be sufficient, I also thought that repeating them twice would be adequate. But the anomalous result in my preliminary test (length of string) showed I was wrong. All of the preliminary results were pretty much accurate but throughout the experiment there was a slight variation in repeated result, this could have been due to either equipment or simple human accuracy. I would say that my investigation was not exactly limited. If I were to extend this experiment then I would repeat the experiment either changing the weight of the pendulum, or change the lengths of string that I used, to check wither these variables would change my results. ...read more.