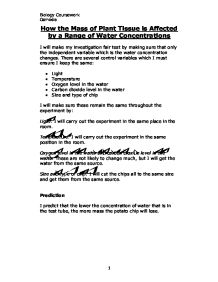 Thirdly, I could have improved the accuracy by doing the experiment more than twice. This would have made my results closer to the 'true' mean. Also, I think I did not control the variable of temperature as well as I could as the temperature was susceptible to changes in the weather and heating in the room. Further Work I feel that further work would give me additional relevant evidence. Firstly, in both of my graphs the second point (0.05 molar) and the third point (0.1 molar) is gaining mass instead of losing it and does not follow the pattern. I think I would like more closely in this area to see what is causing. I would also like to try higher concentrations than 0.3 and see if the line of best fit carries on being smooth or peaks at a certain concentration. Lastly, I would like to try recording the mass every hour for a day and see if the graph has the same shape. Conclusion Overall, I think that I effectively achieved my aim. I believe I used my scientific knowledge to explain my results and analyse them. My investigation successfully proves that osmosis is affected by different concentrations of sodium chloride. ?? ?? ?? ?? Biology Coursework Osmosis 1 ...read more.

This piece of coursework is to be admired, showing very few flaws. They show strong awareness of variables which must be controlled and predicted the outcome and backed it up with scientific knowledge. The experiment is very well laid out, ...

This piece of coursework is to be admired, showing very few flaws. They show strong awareness of variables which must be controlled and predicted the outcome and backed it up with scientific knowledge. The experiment is very well laid out, and diagrams, results tables and pictures are used well to aid their arguments. I like how the piece makes reference to further work, wanting to explore unexplained relationships further - this shows curiosity rather than just assuming it is right.

The analysis is superb throughout. I was very pleased to see the results table was filled out correctly. Units are put in the headings only, the number of decimal places is consistent, and the percentage change is given less degree of accuracy than the readings (as it should). Anyone wanting to know how to fill out tables properly should follow this example! Osmosis is ably explained and it was nice to see reference to the partially permeable membrane. Whenever referring to osmosis, I like to mention it is a passive process (not requiring energy) and this piece has done so. It is a common mistake at GCSE to confuse precision, accuracy and validity: this candidate uses them correctly and shows full understanding of their significance when talking about further work.

This piece of coursework is well written, but could be slightly more sophisticated. I would like to see them cut down the use of the first person, and use a few sophisticated terms such as hypothesis instead of prediction. Nevertheless, it doesn't take away from the content which is excellent. I have no doubt their submitted piece would have included a graph (as it is mentioned) but I must add that this is essential for higher level analysis.