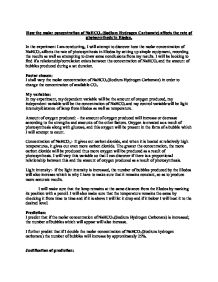 How the molar concentration of NaHCO3 (Sodium Hydrogen Carbonate) affects the rate of photosynthesis in Elodea.

-I will use six different molar concentrations of NaHCO3 (0.2M, 0.1M 0.05M, 0.025, 0.01M and 0M). -I will record the number of bubbles that appear for three minutes instead of recording the number of bubbles for one minute, then repeating twice because there shouldn't be much of a change as the light intensity remains constant and there isn't much of a temperature change as I have learnt from a preliminary experiment I have done in which there was only a 0.50C temperature change in three minutes. Also, I will instead of tallying the number of bubbles which appear (which I did in a preliminary experiment), I will just attempt to count the number of bubbles mentally as I discovered that it would be impossible or incredibly inaccurate to tally as well as observe the bubbles. -With these three different readings for each concentration, I will be able to have a more accurate average. If I do have the time I will repeat my experiment and take as many readings as I can so that I can achieve more accurate results. -I will be using a digital timer instead of a clock/watch so that the results will be more accurate. -The possible hazards present are the possibility of contact with NaHCO3 with the eyes or other sensitive areas. To prevent this from happening I will wear safety goggles in carrying out this experiment. Results: NaHCO3 Concentration (M) Time taken (seconds) Number of bubbles (3 results) ...read more.

The apparatus for measuring the volume of these bubbles (such as a micro-burette) was not available and because the experiment was conducted by me alone, I was not able to do so many things simultaneously. So in general, the accuracy of each measurement could have been improved by the assistance of others and the availability of advanced equipment. The reliability of my results is varied. The pattern I have concluded which exists may only exist for my range of concentrations which are relatively low. Possibly, there could be a maximum number of bubbles/oxygen produced due to other limiting factors. I think that all of my results are quite reliable besides one inaccuracy which could have affected the overall accuracy of the experiment. I still feel that my results warrant some proof that there is a general pattern regarding the concentrations of sodium hydrogen carbonate and the rate of photosynthesis. If I were to suggest any improvements, I would definitely have repeated every one of my inaccurate results (which I couldn't do because of the lack of time) twice, I would have selected "the greenest and healthiest shoots", and attempting to avoid storing Elodea in vessels of water which have been known to restrain photosynthesis as noted by Blackman. Also, I would have tried using more concentrations of sodium hydrogen carbonate, especially the ones in-between the concentrations I used so that I can achieve a greater line and accuracy on my graph. To investigate further, if it were possible I would repeat this same experiment with more advanced equipment, with several repetitions to achieve greater accuracy and with more concentrations in order to improve the conclusions I have drawn from this experiment. ...read more.

*****
A well planned investigation with good justification of steps followed. Good attention to detail in the analysis /evaluation.