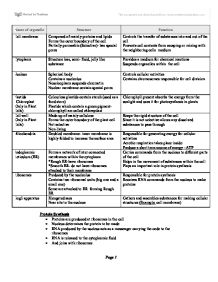 Name of organelle Structure Function Cell membrane Composed of mainly proteins and lipids Forms the outer boundary of the cell Partially permeable (Selective)- has special pores Controls the transfer of substances into and out of the cell Prevents cell contents from escaping or mixing with the neighboring cells medium Cytoplasm Structure less, semi- fluid, jelly like substance Provides a medium for chemical reactions Suspends organelles within the cell Nucleus Spherical body Contains a nucleolus Neucleoplasm suspends chromatin Nuclear membrane contain special pores Controls cellular activities Contains chromosomes responsible for cell division Plastids *Chloroplast (Only in Plant Cells) Colourless plastids contain starch (used as a food store) Plastids which contain a green pigment- chlorophyll are called chloroplast Chlorophyll present absorbs the energy from the sunlight and uses it for photosynthesis in plants Cell wall (Only in Plant Cells) Made up of mainly cellulose Forms the outer boundary of the plant cell Not selective Non-living Keeps the rigid structure of the cell Since it is not selective allows any dissolved substances to pass through Mitochondria Doubled membrane- inner membrane is highly folded to increase the surface area Responsible for generating energy for cellular activities Aerobic respiration takes place inside Produce a short term source of energy -ATP Endoplasmic Reticulum (ER) Forms a network of inter connected membranes within the cytoplasm *Rough ER-have ribosomes *Smooth ER- do not have ribosomes attached to their membrane Carries commands from the nucleus to different parts of the cell Helps in the movement of substances within the cell Plays an important role in protein synthesis Ribosomes Produced by the nucleolus Contains two ribosomal units (big one and a small one) Some are attached to ER forming Rough ER Responsible for protein synthesis Receives RNA commands from the nucleus to make proteins Gogli apparatus Elongated sacs Near site to the nucleus Gathers and assembles substances for making cellular structures (Example: cell membrane) ...read more.

Location of Cell Body- Situated in the Grey Matter of the CNS Synapse * Synapse is the gap between two neurones * Electrical impulse arrives at the end of the neurone * Stimulates the release of neurotransmitter substance (chemical) * Chemical crosses the gap to the second neurone by diffusion * Enzyme is released to destroy the chemical in the synapse Reflex Action * Reflex action is a rapid involuntary response to a stimulus * Does not involve the Brain * Has a protective function Reflex Arc Is the nervous path way provided for a reflex action Advantages of Reflex Action * Sharp object/heat causes limb to be pulled away * Automatic response * No thought involved * Brain does not receive impulse of action * Prevents skin from further damage Spinal Cord * Spinal cord is the main part of the CNS which is involved with reflex actions * Spinal cord is divides into two main roots o Dorsal Root- Sensory Neurones enter the spinal cord o Ventral Root- Motor Neurones leave the spinal cord * Most cell bodies are concentrated in the Grey Matter * Most nerve fibres are concentrated in the White Matter The Brain * The Brain expanded part of the spinal cord * Parts of the brain and their functions o Medulla-controls involuntary actions such as breathing and heart rate o Cerebellum- Maintains the balance of the body o Cerebrum- Deals with acquired skills, memory, intelligence, consciousness, reasoning ability * The cerebrum consists of two cerebral hemispheres which act as the main command centre of the body o Hypothalamus-has receptors which detects changes in the blood as it flows through the brain When the head is jerked backwards violently * A break occurs in the spinal cord * The nerve path way between the brain and the body is severed * No feeling below the break * And the brain no longer has control of muscles below the break Endocrine System * The Endocrine system depends on the action ...read more.

Sprinkler/Trickling filter/Pre Colating * Liquid drips on pebbles (clinker) * Oxygen collects and airates the tank * Pebbles are coated with slime from bacteria and other microbes which are anaerobic * They feed organic materials in sewage * As a result heat is produced which kills pathogens in liquid effluent and makes it safe Purification of Water 1. Grids/strainer remove large objects 2. Water is sent at slow rate through the inlet 3. Slow Sand Filter * Bacteria fungi and other microorganisms reproduce and a jelly which is supported by the sand * A food chain forms and the microorganisms in the water competes with the bacteria from the jelly as the water passes OR 3. Rapid Sand Filter * Alum is added to coagulate as it forms a thin jelly which traps various kinds of particles * The water and the jelly are passed under pressure through large tank * The sand supports the jelly while the water passes rapidly through Chlorination * When bubbled through water forms a weak acid * Which inhibits the growth of microorganisms * And kills microorganisms already present * Water is then kept in large enclosed reservoirs so that no more organisms can enter * Delivered via closed pipes to taps Pit Latrine * Pit must be dug to allow build up during decay * The pit is lined with concrete to prevents seepage and entry by burrowing animals (Example: - Rats) * The floor is made out of concrete this allows hygienic cleaning * Cover for the pit, the cover prevents flies from landing on sewage and prevents smell from escaping * Mesh cover the pit to prevent files from entering to reduce the spread of pathogens Why it is important to consider the location of a pit latrine ? The pit latrine must be situated away from uphill water supply and sited away from houses To reduce flies and other vectors transporting pathogens which might cause diseases to the house Must be built at a distance from the house due to the bad smell ?? ?? ?? ?? Page 1 ...read more.