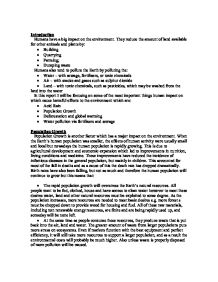 Humans impacts on the environment.

Introduction Humans have a big impact on the environment. They reduce the amount of land available for other animals and plants by: * Building * Quarrying * Farming; * Dumping waste Humans also tend to pollute the Earth by polluting the: * Water - with sewage, fertilisers, or toxic chemicals * Air - with smoke and gases such as sulphur dioxide * Land - with toxic chemicals, such as pesticides, which may be washed from the land into the water In this report I will be focusing on some of the most important things human impact on which cause harmful effects to the environment which are: * Acid Rain * Population Growth * Deforestation and global warming * Water pollution via fertilisers and sewage Population Growth Population Growth is another factor which has a major impact on the environment. When the Earth's human population was smaller, the effects of human activity were usually small and local but nowadays the human population is rapidly growing. This is due to agricultural development and economic expansion which led to improvements in nutrition, living conditions and medicine. These improvements have reduced the incidence of infectious diseases in the general population, but mainly in children. This accounted for most of the fall in deaths and as a cause of this the death rate has dropped dramatically. Birth rates have also been falling, but not as much and therefore the human population will continue to grow but this means that: * The rapid population growth will overstress the Earth's natural resources. ...read more.

As the acidity of the water increases, the water becomes clearer but plants and animals are unable to survive. Aluminium is insoluble in water but as the acidity of the water increases, aluminium becomes more soluble and is released into the water from the soil, harming fish and other aquatic animals. Also all lakes and rivers have their own fragile ecosystem with many different species of plants and animals all depending on one another to survive. If a species of fish is killed, this can affect the whole food web e.g. the animals which feed on the extinct fish will gradually disappear. 3). BUILDINGS - Acid rain helps to erode objects quicker. Statues, buildings, pipes and cars can all suffer from this. The worst affected are things made from limestone and marble as these types of rock are particularly susceptible and can be affected by air pollution in gaseous form as well as by acid rain. 4). HUMAN HEALTH - Acid rain can also result in human health concerns. It can aggravate respiratory ailments such as bronchitis and asthma. Drinking water may also be affected due to it may containing higher levels of toxic metals which have been dissolved from soils and pipes, increasing the acidity of drinking water supplies. Deforestation and global warming Deforestation is the clearing of tropical forests across the Earth. ...read more.

penetration of light into the water is diminished and therefore decreases the productivity of plants and hence their production of oxygen.' * rapid growth of microorganisms e.g. algae, which feed upon the dead organisms so that it is recycled. * the water becomes depleted in oxygen due to the increased use of oxygen by the microorganisms for respiration. The oxygen cannot be replenished due to the lack of water plants in the darkened, deeper waters. * lowered oxygen results in the death of fish and other aquatic animals, due to oxygen shortage. * Further, some of the algal species that 'bloom' produce toxins that render the water useful. The result is a foul smelling, waste filled body of water, which has occurred in many places e.g. Baltic Sea. Sewage is primarily organic in nature and therefore is prone to bacterial decay. As a result, untreated sewage is a source of food for microorganisms. This means that the oxygen concentration in the water will be reduced and therefore aquatic life is stared of the oxygen it needs and also leads to the breakdown of proteins and other nitrogenous compounds, releasing hydrogen sulphide and ammonia, both toxic to marine organisms. Solids suspended in sewage may also blanket river and sea beds preventing respiration and blocking light. The decaying organic matter and nutrients in sewage enhance plant growth and therefore starts the process of eutrophication. ...read more.