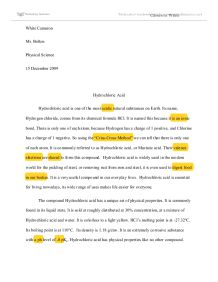 White Cameron Mr. Bolton Physical Science 15 December 2009 Hydrochloric Acid Hydrochloric acid is one of the most acidic natural substances on Earth. Its name, Hydrogen chloride, comes from its chemical formula HCl. It is named this because it is an ionic bond. There is only one of each atom, because Hydrogen has a charge of 1 positive, and Chlorine has a charge of 1 negative. So using the "Criss-Cross Method" we can tell that there is only one of each atom. It is commonly referred to as Hydrochloric acid, or Muriatic acid. ...read more.

This report has lots of interesting and useful details, however also has lots of mistakes and repeats itself on occasion

Overall this report would be 2*