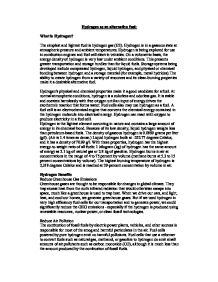 Hydrogen as an alternative fuel

Hydrogen as an alternative fuel: What is Hydrogen? The simplest and lightest fuel is hydrogen gas (H2). Hydrogen is in a gaseous state at atmospheric pressure and ambient temperatures. Hydrogen is being explored for use in combustion engines and fuel cell electric vehicles. On a volumetric basis, the energy density of hydrogen is very low under ambient conditions. This presents greater transportation and storage hurdles than for liquid fuels. Storage systems being developed include compressed hydrogen, liquid hydrogen, and physical or chemical bonding between hydrogen and a storage material (for example, metal hydrides).The ability to create hydrogen from a variety of resources and its clean-burning properties make it a desirable alternative fuel. Hydrogen's physical and chemical properties make it a good candidate for a fuel. At normal atmospheric conditions, hydrogen is a colorless and odorless gas. It is stable and coexists harmlessly with free oxygen until an input of energy drives the exothermic reaction that forms water. Fuel cells also may use hydrogen as a fuel. A fuel cell is an electrochemical engine that converts the chemical energy contained in the hydrogen molecule into electrical energy. ...read more.

The other problem is that hydrogen production depends on the availability of a non-renewable resource, petroleum. Currently, hydrogen is produced from raw petroleum for industrial use, but petroleum supplies may become limited in the near future. Storage Hydrogen may be stored on platforms using a variety of technologies. At room temperature, hydrogen is a gas that can be stored in compressed gas cylinders similar to those used on natural-gas-powered vehicles. Gaseous fuels contain comparatively little energy per unit volume, so platforms using gaseous hydrogen may have a somewhat reduced range compared to platforms using liquid fuels such as gasoline or diesel. Hydrogen also may be stored in liquid form, but it becomes a liquid only at very low temperatures, so special fuel tanks are necessary to keep the hydrogen cold and prevent losses. Liquid hydrogen storage is preferred to compressed gas storage since more hydrogen can be stored in the liquid state than in the gaseous state. Transport Both compressed gaseous hydrogen and liquid hydrogen can be transported by trucks or rail. Liquid hydrogen can be transported in pressurized tanks by truck, rail, barge, or ship. ...read more.

Hydrogen has a higher energy density than petroleum-based fuels. It supplies more energy per unit volume than gasoline, diesel, or kerosene. Hydrogen is extremely abundant. Research and development projects have demonstrated that using compressed hydrogen or liquid hydrogen as a fuel for ICE's, gas turbine engines, or fuel cells is feasible today. Further research is needed to increase the power outputs from the ICE's and gas turbine engines. less energy per volume compared to liquid fuels like gasoline or ethanol. Hydrogen can also be cooled to produce liquid hydrogen, but it is costly. Hydrogen's clean burning characteristics may, one day, make it a popular transportation fuel. For now, the problem of how to store enough hydrogen on a vehicle for a reasonable range, and its high cost, compared to gasoline, are critical barriers to widespread commercial use. Nearly all hydrogen currently is made from natural gas. For that reason, hydrogen usually costs more than natural gas. Hydrogen fuelled vehicles There have only been a small number of prototype hydrogen vehicles made. Most of these have been experimental vehicles made by car manufacturers. Nearly all of these prototype cars were equipped with internal combustion engines, similar to ones that run on gasoline. ...read more.