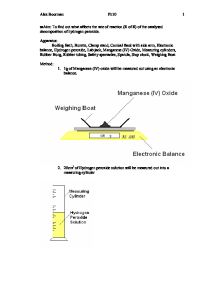 saAim: To find out what affects the rate of reaction (R of R) of the catalysed decomposition of hydrogen peroxide. Apparatus: Boiling Bath, Burette, Clamp stand, Conical flask with side arm, Electronic balance, Hydrogen peroxide, Lab jack, Manganese (IV) Oxide, Measuring cylinders, Rubber Bung, Rubber tubing, Safety spectacles, Spatula, Stop clock, Weighing Boat Method: 1. 1g of Manganese (IV) oxide will be measured out using an electronic balance. 2. 20cm3 of Hydrogen peroxide solution will be measured out into a measuring cylinder 3. The Apparatus will be set up as shown: 4. The bung will be removed and the manganese (IV) oxide will be placed inside the conical flask with side arm. It was decided that it was easier to put the solid in first as the liquid is easier to pour into the flask, seeing as the solid has a tendency to stick to the side of the container it is in this case the weighing boat. This way if some of the solid sticks to the side of the weighing boat then it would not matter as the solid can be tapped in slowly as the time that it takes to get into the flask is not significant. 5. The 20cm3 of Hydrogen peroxide solution will be poured in and the bung replaced immediately. The stop clock will be started as soon as the bung is replaced this is because although the reaction starts when the Hydrogen Peroxide is poured in, oxygen only starts to escape into the burette when the bung is replaced. When the bung is not there the oxygen escapes through the top of the conical flask. 6. The reaction will then take place. Oxygen (O2) and water (H2O) will be produced. 2H2O2(l)�2H2O(l) + O2(g) The oxygen produced will exit the conical flask via the side arm, pass down the rubber tubing and bubble up through the water in the inverted burette. ...read more.

This was because the time limit was flexible and thus the experiment time would lengthen or shorten to collect the results whereas if the amount of water being displaced in 30 seconds was measured if the time taken to displace all the water in the entire burette was 29 seconds then the experiment would have to be repeated with a different amount of catalyst. Results: When the reactants put into the conical flask (hydrogen peroxide concentration = 100%) the reaction took less than a second. This was too fast to accurately measure and so the amount of catalyst was decided to be altered to a more appropriate amount, one that would provide measurable results for all concentrations of hydrogen peroxide. The amount of catalyst was changed to 0.5g as it was deemed that this would accelerate the reaction to a far lesser extent allowing a reading to be taken. However the result produced with 100% Hydrogen Peroxide was under a second and so the decision was again made to reduce the amount of catalyst. The catalyst was again reduced to 0.2g. This produced a result of 6:56 seconds. This was a long enough time for us to be able to measure the time taken to displace 30cm� of water in the burette and so it was decided that 0.2g would be the amount of catalyst used for the rest of the experiment. We then repeated the experiment twice more, to provide three repeats. Results two and three were 10:54 seconds and 3:27 seconds respectively. Result three is three times the size of result two. The average of the three results was 07:05 seconds while the variation between results was 07:27 seconds. This means that the variation between results was larger than the result itself, which provides very inaccurate results. As a result it was decided that decreasing the amount of catalyst further would increase the time taken to displace 30cm� of water in the burette. ...read more.

The following method will be used: Apparatus: Conical flask, Electronic balance, Hydrogen peroxide, Manganese (IV) Oxide, Safety spectacles, Spatula, Stop clock, Weighing Boat 1. 5g of Manganese (IV) oxide will be measured out using an electronic balance. 2. 20cm3 of Hydrogen peroxide solution will be measured out into a measuring cylinder using syringes. 3. The Manganese (IV) Oxide will then be placed in a conical flask. The Weighing boat will then be re-weighed. The total amount of MaO2 in the flask equals the weight of the boat and the MaO2 before the MaO2 has been tipped in take away the weight of the boat on its own after the MaO2 has been tipped in. 4. The flask and its contents will then be weighed using the electronic balance. 5. The Conical flask will be removed from the scales and the 20cm� of Hydrogen Peroxide will be poured in. The stop watch will be started immediately. 6. The reaction will then take place. Oxygen (O2) and water (H2O) will be produced. 2H2O2(l)�2H2O(l) + O2(g) The oxygen produced will leave the conical flask out of the opening at the top. 7. When Reaction is no longer taking place the stopwatch will be stopped. The Conical flask will then be reweighed. The difference in weight from the start to the end of the reaction is the mass of the oxygen given off. 8. The R of R = Change in mass/time taken for reaction to stop reacting. 9. The flask will then be rinsed and dried thoroughly before being reused. 10. This will be repeated 5 times for each concentration from 1% to 100% in steps of 1%, this will provide results that will be far more accurate and reliable. This experiment allows a larger amount of catalyst to be used and therefore is more accurate. Also all of the oxygen that escapes is measured whereas in the first experiment some of the oxygen escapes without being measured in the space of time between when the H2O2 is poured in and when the bung is replaced. Alex Boorman Ph10 1 ...read more.