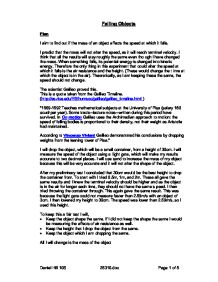 I predict that the mass will not alter the speed, as it will reach terminal velocity. I think that all the results will stay roughly the same even though I have changed the mass. When something falls, its potential energy is changed into kinetic energy. Therefore the only thing in this experiment that could alter the speed at which it falls is the air resistance and the height. (These would change the time at which the object is in the air). Theoretically, as I am keeping these the same, the speed should not change.

The scientist Galileo proved this.

This is a quote taken from the Galileo Timeline. (http://es.rice.edu/ES/humsoc/galileo/galileo_timeline.html)

"1589-1592 Teaches mathematical subjects at the University of Pisa (salary 160 scudi per year). Some tracts--lecture notes--written during this period have survived. In OnmotionGalileo uses the Archimedian approach to motion: the speed of falling bodies is proportional to their density, not their weight as Aristotle had maintained.

According to Vincenzo Viviani

As you can see I have taken three sets of results for each mass and used the average, to make my results accurate.

My results have proved my prediction, that the mass would not affect the speed. This is made clear by this scatter graph, with a line of best fit. 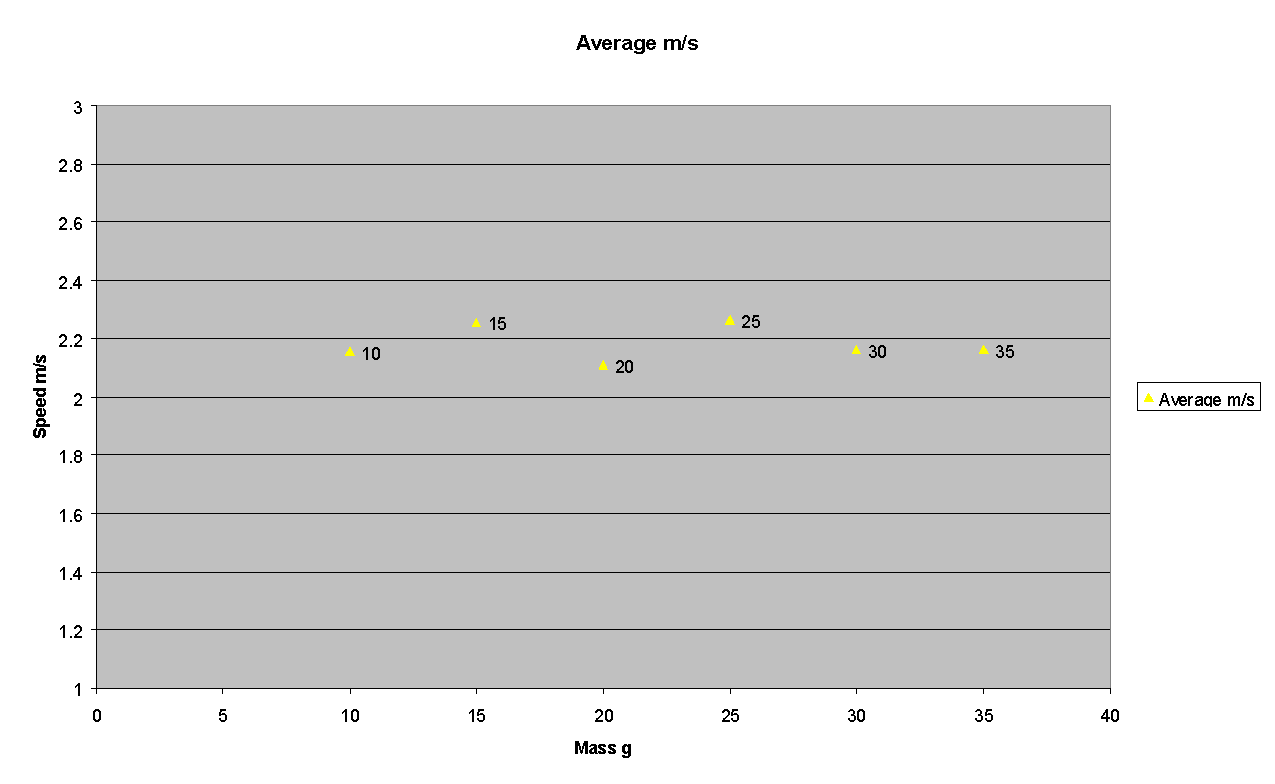 If I used a mechanism to drop the object this would help eliminate spinning. However, the sand was sometimes uneven inside the container so this would make the object spin at the start. The other problem with spinning was that the object would have fallen faster when it spun because it would have less air resistance. It would have been more accurate if I had used weights of the same size but different mass, instead of sand.

Also, when I dropped the container, I may have not dropped it from exactly the same distance every time. I also may have added force to the object with force when I dropped it. The mechanism would have also stopped this.

This would be a diagram of the mechanism I would use if I were to do it again.

When I pull the string, the mechanism would drop the object evenly.

Even with all these minor problems my results are still very accurate.

I now know for a fact that my prediction is correct because I have proved it in 3 different ways,

This is a good report of an investigation
1. The report is well structured, although the plan could be broken up to include additional subheadings.
2. The prediction includes well researched science.
3. The evaluation is the strongest section of the report.
4. The analysis contains good calculations, although this needs to be compared to the results that have been obtained.
*** (3 stars)