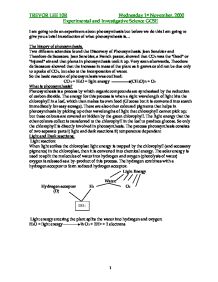 I am going to do an experiment about photosynthesis but before we do this I am going to give you a brief introduction of what photosynthesis is... The history of photosynthesis. Two different scientists found the Discovery of Photosynthesis: Jean Senebier and Theodore de Saussure. Jean Senebier, a French pastor, showed that CO2 was the "fixed" or "injured" air and that plants in photosynthesis took it up. Very soon afterwards, Theodore de Saussure showed that the increase in mass of the plant as it grows could not be due only to uptake of CO2, but also to the incorporation of water. So the basic reaction of photosynthesis was outlined: CO2 + H2O + light energy (CH2O)n + O2 What is photosynthesis? Photosynthesis is a process by which organic compounds are synthesised by the reduction of carbon dioxide. The energy for this process is when a right wavelength of light hits the chlorophyll in a leaf, which then makes its own food (Glucose but it is converted into starch immediately for easy storage). There are also other coloured pigments that helps in photosynthesis by picking up other wavelengths of light that chlorophyll cannot pick up; but these colours are covered or hidden by the green chlorophyll. The light energy that the other colours collect is transferred to the chlorophyll in the leaf to produce glucose. ...read more.

This is what I think the graph will look like: Equipment: 1x capillary tube. 1x rubber bung. 2x rubber tubing. 1x conical flask. Some pondweed. Water. 1cm� dye. 1x Lamp. 1x Stop clock. 1x Ruler. 1x Beaker. 1x Thermometer. Diagram: How does photosynthesis work? Photosynthesis begins when light hits the chlorophyll molecule in the leaf of a plant, which reflects the green part of the chlorophyll and captures the light (also the other coloured parts of the chloroplast capture the different waves of light). The energy trapped in the chlorophyll is then converted into chemical energy, this reaction is written as: ADP+P ATP This process involves several things. Firstly the light energy absorbed by the chlorophyll is used to separate hydrogen and the oxygen molecules from the water. The oxygen is then released through the stomata. The hydrogen combines with a hydrogen acceptor to form reduced hydrogen acceptor. Chlorophyll makes energy available for the regeneration of ATP from ADP. This process is called Photolysis, and takes place in the grana of the chloroplast. The energy is stored and then used in the process of photosynthesis so this is a continuous cycle where the plant creates energy from photosynthesis for food and also reusing this energy in a further process of photosynthesis. ...read more.

The oxygen molecules go into the air as a by-product and the hydrogen is used to make a different type of energy called DH2 where the D is the reduced hydrogen acceptor. This part is the light reaction and is light dependant. The energy produced then goes into making glucose this is the dark reaction of the process. I am doing the same distance three times because I need an average to see if my results are reliable or not. I will displace the results that are odd so that I will know which part I need to do again to get a proper set of results. I think that in the graph the amount of oxygen produced will rise rapidly because the plant needs light to produce the energy needed for photosynthesis and then the curve will tail off because the lamp is so far away the light is not concentrated on the lamp there is a loss of light like in this diagram: So I think that the graph will look like this: The limiting factors will be the CO2 levels because the elodea uses the CO2 during photosynthesis so the CO2 levels will slowly drop. In order to stop this from happening I will change the water every time I change the distance of the lamp from the beaker so therefore the CO2 levels will stay constant. ...read more.