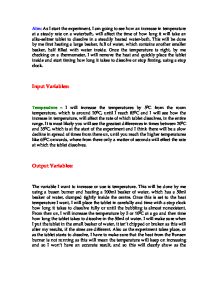 I am going to see how an increase in temperature at a steady rate on a waterbath, will affect the time of how long it will take an alka-seltzer tablet to dissolve in a steadily heated water-bath.

Aim: As I start the experiment, I am going to see how an increase in temperature at a steady rate on a waterbath, will affect the time of how long it will take an alka-seltzer tablet to dissolve in a steadily heated water-bath. This will be done by me first heating a large beaker, full of water, which contains another smaller beaker, half filled with water inside. Once the temperature is right, by me checking on a thermometer, I will remove the heat and quickly place the tablet inside and start timing how long it takes to dissolve or stop fizzing, using a stop clock. Input Variables: Temperature - I will increase the temperatures by 50C from the room temperature, which is around 200C, until I reach 850C and I will see how the increase in temperature, will affect the rate of which tablet dissolves, in the entire range. It is most likely you will see the greatest differences in times between 200C and 350C, which is at the start of the experiment and I think there will be a slow decline in spread of times from there on, until you reach the higher temperatures like 650C onwards, where from there only a matter of seconds will effect the rate at which the tablet dissolves. Output Variables: The variable I want to increase or use is temperature. This will be done by me using a busen burner and heating a 200ml beaker of water, which has a 50ml beaker of water, clamped tightly inside the centre. ...read more.

The large beaker, now acts as a water bath to keep the temperature I need constant for longer after the heating stop and I dissolve the tablet. Once I have reached the temperature I am looking for, I will immediately stop the heating and quickly place the tablet in the small beaker and start the time. I will stop it when the tablet has almost dissolved. After each attempt, I rinse out the small beaker as it has the white powdery remains from the previous attempt, and I set up the apparatus again. I refill the water and start the heating until it has to be stopped and I dissolve the tablet and time how long it takes at each increasing temperature. I will continue this pattern until I finish all my reading that I need up to 850C. I will record all my readings in a table and then calculate the average times for each temperature for the tablet to dissolve in the water. Once I have finished that, I will do several graphs for that, comparing the times and temperatures. Obtaining Evidence(Skill O) As you can see from my graphs, there is a consistent curve, top to bottom each time, showing me that I have fairly accurate results with perhaps some slight miner anomalies. So now I can comment on my results more accurately knowing that I have not made mistakes in my results. If I did it would be very noticeable as it would be an anomalous result and stick out (like a sore thumb). ...read more.

Here is a list of the changes that could have been made to improve the experiment. Thermostatic Waterbath:Instead of using a Bunsen burner and two beakers of water, which the 200ml one acts as the water bath, we could have used an electronic waterbath, which would have been more faster and accurate in giving the correct temperatures. Your results would have been more accurate as the temperature stays constant and exact for longer. Also it would have been much safer as you wouldn't have too touch any hot beakers. If the racks inside could hold these large beakers, then it would be no problem and this would make the experiment much easier and safer, though with the apparatus we have now, it presents a challenge in getting the set up all right, which is why we do the experiment. Amount of Water used: If we could have experimented for a little longer, we could have found a suitable amount of water to use to dissolve the tablet in. This would improve the accuracy of the experiment and would also give a more suitable answer range. Replicating the experiment:I was glad I did all the temperatures I needed at least three times as this showed me if any of my results were inaccurate or totally wrong. I felt if we had more time and perhaps better heating equipment, we could have done more results at different temperatures and so this would help further as I would have more results to use and so I can comment on more in my conclusion and graph. ...read more.