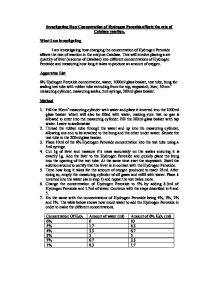 I am investigating how changing the concentration of Hydrogen Peroxide affects the rate of reaction in the enzyme Catalase. This will involve placing a set quantity of liver (a source of Catalase)

Repeats are taken to increase the accuracy of the results obtained. If any inaccurate results are taken then the two accurate results reduce the inaccuracy on the average produced. It also makes it much easier to see anomalous results. Six different concentrations of Hydrogen Peroxide are being investigated. This means the results can be plotted on a line graph with sufficient points to allow a trend to be identified. Too few points would make it hard to see the trend. Using a maximum of 6% concentration ensures that the chemical is not too dangerous to work with. Factors to keep constant Factor How kept constant Scientific reason for doing so Temperature of reaction. By placing the test tube containing the reactants into a water bath at room temperature. The hotter the particles, the more kinetic energy the particles have, which makes the probability of them colliding into each other higher. When the particles have more energy, they are more likely to react when they collide into each other. If the temperature is decreased, the particles slow down. This will make the reaction slower, as they will have less kinetic energy. Factor How kept constant Scientific reason for doing so Amount of gas collected Always get time when 25cm3 have been produced If the time is not stopped after it gets to ...read more.