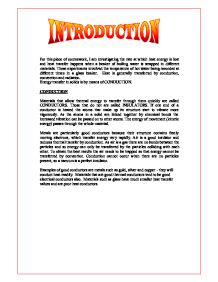 I am investigating the rate at which heat energy is lost and heat transfer happens when a beaker of boiling water is wrapped in different materials.

INTRODUCTION For this piece of coursework, I am investigating the rate at which heat energy is lost and heat transfer happens when a beaker of boiling water is wrapped in different materials. These experiments involved the temperature of hot water being recorded at different times in a glass beaker. Heat is generally transferred by conduction, convection and radiation. Energy transfer in solids is by means of CONDUCTION. CONDUCTION Materials that allow thermal energy to transfer through them quickly are called CONDUCTORS. Those that do not are called INSULATORS. If one end of a conductor is heated the atoms that make up its structure start to vibrate more vigorously. As the atoms in a solid are linked together by chemical bonds the increased vibration can be passed on to other atoms. The energy of movement (kinetic energy) passes through the whole material. Metals are particularly good conductors because their structure contains freely moving electrons, which transfer energy very rapidly. Air is a good insulator and reduces thermal transfer by conduction. As air is a gas there are no bonds between the particles and so energy can only be transferred by the particles colliding with each other. To obtain the best results the air needs to be trapped so that energy cannot be transferred by convection. Conduction cannot occur when there are no particles present, so a vacuum is a perfect insulator. Examples of good conductors are metals such as gold, silver and copper - they will conduct heat readily. Materials that are good thermal conductors tend to be good electrical conductors also. Materials such as glass have much smaller heat transfer values and are poor heat conductors. CONVECTION Convection occurs in liquids and gases because these materials flow (which is why they are described as `fluids'). Convection occurs when hot fluids rise and cold fluids sink. The circulation of fluids that this causes is called a CONVECTION CURRENT. ...read more.

At the time I felt that these five readings were enough. I repeated the experiment twice and took the average, I felt that this made the readings much more accurate yet not as time consuming as it would have been had I done the experiment three times. When looking at my graphs, it is apparent that there are several anomalous points. There are many explanations that could suggest why these points have been obtained. There could be anomalous points because of the bubble wrap. The material could have been overlapping, allowing an extra piece to be added when each layer is applied. Because I used cello tape, it could have helped to insulate or reflect the heat back as it was shiny cello tape that was being applied. When looking at the graphs, one could also suggest that there are anomalous points because the results are starting to form a curve, which could only be seen if the experiment had been carried out for a longer period of time. Another reason why these results may have been in error is because I may have recorded the temperature at slightly different times, but also, these points maybe due to the movement of the thermometer, from the middle of the beaker to the edges. I feel that although I was happy with what I had done, I could have made the experiment a lot better if I had done certain things differently. One factor that I feel probably would have made a significant difference to my experiment and readings would be a lid. If a lid were used there would probably be a great difference in the rate of heat loss. This is because a large amount of heat would have escaped from the top of the beaker by convection and evaporation. Hence, a lid would slow down these processes. Also what the lid is made of will make a difference. ...read more.

I needed to ensure that the bulb of the thermometer was covered but the amount of water couldn't be too much, as it would take a long time to cool. I then decided upon my hypothesis and was ready to start my investigation next time. I gathered the necessary equipment so that my tests could run smoothly. The equipment consisted of a: A beaker, a thermometer, bubble wrap, cello tape, a scissors, a kettle and a stopwatch. In point form; this is how I carried out my experiment: � Collected equipment � Cut a piece of bubble wrap that was sufficient to form one layer around the beaker. � Stuck the bubble wrap to the beaker using cello tape. � Boiled a kettle full of water. � Carefully poured 100ml of water into the beaker. (This amount will cover the bulb of the thermometer yet not take an extensive amount of time to complete my experiments) � Placed the thermometer into beaker and watched it rise. � Waited until the temperature dropped to 80�C. (Chose this starting temperature as it allowed me time to get back to my table and be prepared to begin the experiment. It also made the experiment fair because I had a set temperature to start rather than beginning as soon as the water was in.) � Started the stopwatch and timed ten minutes. Every two minutes I noted down the temperature of the water in my results tables. � When I had finished the ten-minute experiment, I repeated the whole process for accuracy and then took the averages for the temperatures at the different stages of the experiment. (It would have been more accurate to do it three times and then take the average, but it would take to long, therefore, I was relying upon my two sets of results � After doing this experiment twice, I added another layer of bubble wrap and started again (making sure to record my results). I continued to do this until I had the results for the beaker with one layer of bubble wrap up unto five layers of bubble wrap. ...read more.