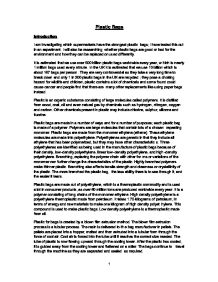 I am investigating which supermarkets have the strongest plastic bags; I have tested this out in an experiment. I will also be researching whether plastic bags are good or bad for the environment and how they can be replaced or used differently.

Plastic Bags Introduction I am investigating which supermarkets have the strongest plastic bags; I have tested this out in an experiment. I will also be researching whether plastic bags are good or bad for the environment and how they can be replaced or used differently. It is estimated that we use over 500 billion plastic bags worldwide every year, which is nearly 1 million bags used every minute. In the UK It is estimated that we use 10 billion which is about 167 bags per person. They are very controversial as they take a very long time to break down and only 1 in 200 plastic bags in the UK are recycled; they pose a choking hazard for wildlife and children, plastic contains a lot of chemicals and some found could cause cancer and people find that there are many other replacements like using paper bags instead. Plastic is an organic substance consisting of large molecules called polymers. It is distilled from wood, coal, oil and even natural gas by chemicals such as hydrogen, nitrogen, oxygen and carbon. Other chemicals present in plastic may include chlorine, sulphur, silicone and fluorine. Plastic bags are made in a number of ways and for a number of purposes; each plastic bag is made of a polymer. Polymers are large molecules that contain lots of a chosen repeating monomer. Plastic bags are made from the monomer ethylene (ethene). These ethylene molecules are made into polyethylene. Polyethylenes are generic in that they include all ethylene that has been polymerized, but they may have other characteristics. ...read more.

I could have maybe improved the reliability of my results if I had repeated it more times and comparing my results with someone else's to see if we are getting the same. http://mexipreneur.blogspot.com/2010_08_01_archive.html Argument Why they are good? Plastic bags have so many practical uses. There are too many uses of plastic bags to be able to get rid of them. Plastic bags are used as bin liners - you cannot replace bin liners with another type of bag - it is not efficient and even worse for the environment. Banning plastic bags would just see paper bags clogging up our waterways. Plastic bags are handy to have and are an important part of our lives. Most plastic bags are made from a plastic called polyethylene; it is good, because it can, in its raw form, be changed to make any colour, shape, form or size desired which makes it inherently versatile. It is also very durable and watertight; making it an ideal carrier of heavy good, although it can't be recycled it can be re-used over and over again. Plastic bags can be melted and remoulded, and be made into plastic lumber in order to be used on things such as park benches and in fencing material. They also emit lower levels of both solid waste and greenhouse gases, and any plastic that goes un-recycled is capable of being burned in order to generate electricity, which can contribute to lowering sulphur emissions produced by burning fossil fuels like coal. ...read more.