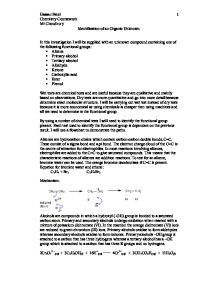 Identification of an Organic Unknown.

Identification of an Organic Unknown. In this investigation I will be supplied with an unknown compound containing one of the following functional groups: * Alkene * Primary alcohol * Tertiary alcohol * Aldehyde * Ketone * Carboxylic acid * Ester * Phenol Wet tests are chemical tests and are useful because they are qualitative and mainly based on observations. Dry tests are more quantitative and go into more detail because determine exact molecular structure. I will be carrying out wet test instead of dry tests because it is more economical as using chemicals is cheaper then using machines and all we need to determine is the functional group. By using a number of chemical tests I will need to identify the functional group present. Each test used to identify the functional group is dependant on the previous result. I will use a flowchart to demonstrate the paths. Alkenes are hydrocarbon chains which contain carbon-carbon double bonds, C=C. These consist of a sigma bond and a pi bond. The electron charge cloud of the C=C is the centre of attraction for electrophiles. In most reactions involving alkenes, electrophiles are added to the C=C to give saturated compounds. This means that the characteristic reactions of alkenes are addition reactions. To test for an alkene, bromine water can be used. The orange bromine decolourises if C=C is present. Equation for bromine water and ethene: C2H4 + Br2 C2H4Br2 Mechanism: Alcohols are compounds in which a hydroxyl (-OH) group is bonded to a saturated carbon atom. Primary and secondary alcohols undergo oxidation when reacted with a mixture of potassium dichromate (VI). In the reaction the orange dichromate (VI) ions are reduced to green chromium (III) ions. Primary alcohols oxidise to form aldehydes whereas secondary alcohols oxidise to form ketones. Primary alcohols -OH group is attached to a carbon that has three hydrogens whereas a tertiary alcohol has a -OH group which is attached to a carbon that has three R groups and no hydrogens. ...read more.

I will also add water to the Fehlings solution in a separate test tube and use it as a control to show it only reacts with aldehydes. Outcomes: a colour change to red/ brown precipitate indicates presence of aldehyde, no colour change suggests it is a ketone. Refer to hypotheses table. Justification: only aldehydes are easily oxidised to acids, ketones are not. Fehlings solution is an alkaline copper (Cu2+) solution, which becomes reduced to (Cu+), a red/ brown precipitate of Cu2O, and the aldehyde becomes oxidised to RCOO- Safety: follow general safety procedures. 3. Test for carboxylic acid Apparatus: * Sodium hydrogen carbonate * Pipette * 2 test tubes * Limewater * Clamp * Rubber tube Procedure: add sodium hydrogen carbonate solid to 2cm3 of the unknown in a test tube. If effervescence occurs then add bubbles to limewater in test tube attached to a clamp, should be bubbled by using a rubber tube. Outcomes: if effervescence occurs then the bubbles should be added to limewater. If the limewater turns milky/ cloudy this shows that carbon dioxide gas is being released. If there is no effervescence and limewater does not turn cloudy then therefore the unknown must either be ester, alkene, phenol or alcohol. Justification: This shows that it is a carboxylic acid because it is the only compound in the unknown sample, which liberates carbon dioxide. The hydrogen in the carboxylic acid is replaced by sodium and water and carbon dioxide are also formed. Safety: follow general safety procedures. Be careful with apparatus to avoid breakages. 4. Test for phenol Apparatus: * FeCl3 crystals * Water * Test tube Procedures: dissolve crystals of FeCl3 in 2cm3 of water and add to 2cm3 of the unknown organic. Also add crystals to a test tube of water to use as a control to show it doesn't react with other groups and compare results. Outcome: a colour change to purple/ violet suggests that it is a phenol however if there is no change then it is an ester, alkene or alcohol. ...read more.

I reason I chose that I would use Iron (III) Chloride test before using bromine water is because phenol and alkene both react with bromine water whereas only phenol reacts with the Iron (III) Chloride and not alkene. I will also use sodium after testing for Primary alcohol because all alcohols react with sodium however tertiary alcohols do not react with oxidising agents and if previous test is negative then it can only test for tertiary alcohols as you can see in the flow chart. My flow chart I feel is very reliable and precise because each test is dependant on previous result and the reagents will not react with other functional groups as set out in my flow chart. I can confidently say my methods and equipment are reliable and accurate to prove my results valid even though certain variables cannot be controlled. After identifying the functional group present, infra red spectra and mass spectrum can be used to confirm results and identify structure. Precautions must be taken when handling: * 2, 4-dinitrophenylhydrazine as it toxic by skin contact * Eye protection must be worn at all times in the lab. * Be certain that there are no flammables in the area when lighting a flame. * Be alert for hazards in the lab. Do not proceed with any experiment until you understand the hazards involved. * Report all injuries to your instructor, even if they appear to be minor. * Do not come into contact with any of the solvents or reagents used in this lab other than soap and water. Remove gloves and wash hands before leaving lab. * Clean up all chemical spills immediately, this includes drips on bottles. * Do not leave any bottle uncapped. * Dispose of all wastes as directed. (Ask before you dump.) Cleaning Up: 1. Discard wastes for each test after consulting the teacher 2. Return all standard samples and test reagents to their original sources. 3. Wipe down your work area of the lab bench with a damp sponge/ tissue. 4. Place all equipment and apparatus in their correct location. ...read more.