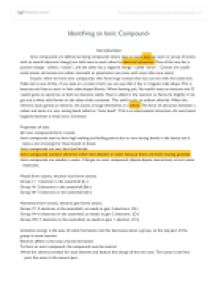 Identifying an Ionic Compound. Objectives: To learn and test for metal ions and non-metal ions and then apply them to discover the identity of an unknown ionically bonded substance

Identifying an Ionic Compound- Introduction Ionic compounds are defined as being compounds where two or more ions (an atom or group of atoms with an overall electrical charge) are held next to each other by electrical attraction. One of the ions has a positive charge - called a "cation", and the other has a negative charge - called "anion". Cations are usually metal atoms and anions are either nonmetal or polyatomic ions (ions with more than one atom). Usually, when we have ionic compounds, they form large crystals that you can see with the naked eye. Table salt is one of this- if you look at a crystal of salt, you can see that it has in irregular cube shape. This is because salt likes to stack in little cube-shaped blocks. When forming salt, Na readily loses an electron and Cl readily gains an electrons so both can become stable. Heat is added in the reaction so Na burns brightly in CL gas and a white solid forms on the sides of the container. This solid is salt, or sodium chloride. When the chlorine atom gained an electron, the atoms arrange themselves in a lattice. The force of attraction between a cation and anion is a very strong bond called an "ionic bond". This is an electrostatic attraction. An ionic bond happens between a metal and a nonmetal. Properties of salts: 0. All ionic compounds form crystals. 0. Ionic compounds tend to have high melting and boiling points due to very strong bonds in the lattice and it takes a lot of energy for these bonds to break. 0. Ionic compounds are very hard and brittle 0. Ionic compounds conduct electricity when they dissolve in water because there are freely moving particles. ...read more.

Is the result positive or negative? 0. Perform a series of tests to identify the metal component: In another test tube, add 3cm3 �0.05 of 0.1 mol/dm3 NaOH to test for Cu2+, Fe2+, Fe3+. Is the result positive or negative? Using the test tube from Part 4 Step 1 containing 3cm3 �0.05 of 0.1 mol/dm3 NaOH, heat the test tube over a Bunsen burner and hold litmus paper on the top. If the litmus paper turns green, then the test for NH4+ is positive. If not, then it is negative. Dip a microspatula in a beaker containing 0.1 mol/dm3 of HCL and then add the unknown ionic compound from the fifth test tube on the microspatula. Place the microspatula over the Bunsen burner to test for Na+, K+, Ca2+, Cu2+ and observe a color change in the flame. Is the result positive or negative? 0. See on your data table which metal and non-metal resulted positive and identify your unknown ionic compound by writing a chemical formula. 0. Once you have identified your substance you can clean up and leave. Leave the solutions in the test tubes for disposal. Tables 2- Testing for my compound- TEST TUBE NUMBER 9 Data Analysis My first data table shows the results of part 1 of the experiment of tests for non metal ions. The first three ions tested were Cl-, Br-, I- where I tested for halide ions using silver nitrate. As we can see on my data table, a white precipitate indicates a chloride, a light green precipitate indicates a bromide, and a light/pale yellow color indicates an iodide. In testing for all halide ions, no bubbles were formed. The next test was for sulphate ions (SO42- ) ...read more.

Especially if silver nitrate had been exposed to a lot of sunlight, this would have caused the solution to become old and not act effectively. A possible source of error is that some people may have used different quantities of solutions rather than respecting the decided quantity 2cm3�0.05, and this may have caused more evident or less evident reactions altering our results. Another source of error was that people did not clean and dip the nichrome wire well enough in the hydrochloric acid causing some of the previous substance to remain. This would have caused the flames to be of a different color causing our results to be inaccurate. One way I would modify this experiment is that I would add dilute ammonia solution to the silver chloride and silver bromide as the colors of the precipitates are difficult to distinguish. By adding ammonia solution, the silver chloride would dissolve but silver bromide and silver iodide would not as they are insoluble and this would allow us to distinguish them. Another modification to the lab is that I would insert the test for a (non-metal) nitrate ion (NO3-) and I would add 2cm3�0.05 of sodium hydroxide solution to the nitrate. Then I would add powdered aluminum to the nitrate ion and this would cause the formation of many bubbles and ammonia gas will be given off. If a litmus paper were put on top, it would turn blue meaning that it is a basic solution. Another way I would modify the experiment is that I would use the flame test to compare a calcium compound and a magnesium compound. The magnesium compound would have no effect in the flame while the calcium compound would create a brick red flame. ...read more.

This is a very complex GCSE experiment, using aspects of chemistry that would not usually be encountered until AS level. It is very detailed, uses excellent results tables and makes valid, repeatable conclusions.

Overall, this piece of work is 5*