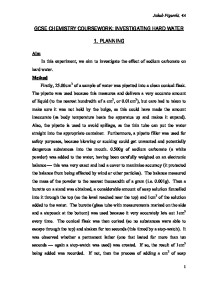 In this experiment, we aim to investigate the effect of sodium carbonate on hard water.

GCSE CHEMISTRY COURSEWORK: INVESTIGATING HARD WATER 1. PLANNING Aim In this experiment, we aim to investigate the effect of sodium carbonate on hard water. Method Firstly, 25.00cm3 of a sample of water was pipetted into a clean conical flask. The pipette was used because this measures and delivers a very accurate amount of liquid (to the nearest hundredth of a cm3, or 0.01cm3), but care had to taken to make sure it was not held by the bulge, as this could have made the amount inaccurate (as body temperature heats the apparatus up and makes it expand). Also, the pipette is used to avoid spillage, as the thin tube can put the water straight into the appropriate container. Furthermore, a pipette filler was used for safety purposes, because blowing or sucking could get unwanted and potentially dangerous substances into the mouth. 0.500g of sodium carbonate (a white powder) was added to the water, having been carefully weighed on an electronic balance - this was very exact and had a cover to maximise accuracy (it protected the balance from being affected by wind or other particles). The balance measured the mass of the powder to the nearest thousandth of a gram (i.e. 0.001g). Then a burette on a stand was obtained, a considerable amount of soap solution funnelled into it through the top (so the level reached near the top) and 1cm3 of the solution added to the water. The burette (glass tube with measurements marked on the side and a stopcock at the bottom) was used because it very accurately lets out 1cm3 every time. The conical flask was then corked (so no substances were able to escape through the top) and shaken for ten seconds (this timed by a stop-watch). It was observed whether a permanent lather (one that lasted for more than ten seconds - again a stop-watch was used) was created. ...read more.

then should have been, so the water was actually harder than it should have been, and more soap was needed for a lather to appear. Also, the anomalies could have been recorded because a different set of equipment was used for different stages - if, for example, one electronic balance used was slightly inaccurate (because of damage, say) and another was absolutely accurate, then minor differences in exact result trends would be seen, and on the graph these appear as wrong anomalies. This is because, if a inaccurate amount of sodium carbonate was added, then the water would become either softer or harder than expected, and so the amount of soap needed to make a lather would rise or fall accordingly, too. More work could be done to extend this investigation and thus provide more support for the conclusion. Many different samples of water (e.g. distilled, from the laboratory, from students' homes) could be tested by a similar process to the one in this experiment. Same amounts of the types of water could be put into conical flasks (using pipettes) and then the soap solution poured into them via the burette. It would be recorded how many cubic centimetres were needed to produce a lather, as in this coursework experiment. This would show that the calcium ions have the effect of reducing the amount of lather. This is because the distilled water, which is pure H2O, with nothing dissolved in it (including calcium ions), would be proved to be very soft (producing a lather very quickly with the soap solution), whilst another type of water, which has many calcium ions dissolved in it, would be very hard (a lather made only after much soap solution was added). All this information would allow me to confirm my conclusion here that the more sodium carbonate is used and the more calcium ions can be removed by it, the faster a lather will be seen and so the softer the water will be. Jakub Figurski, 4A 1 ...read more.