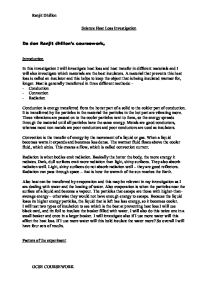 Science Heat Loss Investigation Da don Ranjit dhillon'z coursework, Introduction In this investigation I will investigate heat loss and heat transfer in different materials and I will also investigate which materials are the best insulators. A material that prevents this heat loss is called an insulator and this helps to keep the object that is being insulated warmer for, longer. Heat is generally transferred in three different methods: - - Conduction - Convection - Radiation Conduction is energy transferred from the hotter part of a solid to the colder part of conduction. It is transferred by the particles in the material the particles in the hot part are vibrating more. These vibrations are passed on to the cooler particles next to them, so the energy spreads through the material until all particles have the same energy. Metals are good conductors, whereas most non-metals are poor conductors and poor conductors are used as insulators. Convection is the transfer of energy by the movement of a liquid or gas. When a liquid becomes warm it expands and becomes less dense. The warmer fluid floats above the cooler fluid, which sinks. This creates a flow, which is called convection current. Radiation is when bodies emit radiation. Basically the hotter the body, the more energy it radiates. Dark, dull surfaces emit more radiation than light, shiny surfaces. They also absorb radiation well. Light, shiny surfaces do not absorb radiation well - they are good reflectors. ...read more.

I will: o Wear Safety goggles to protect my eyes o Be careful when pouring the water out of the kettle o Also I will use a cloth to handle the measuring cylinder, as it will be considerably hot. Prediction I think that as the experiment goes on the rate of heat loss will slowly decrease so there will not be as big difference during the first few readings then toward the end. Out of the two materials I chose to investigate I think that the tin foil will be the better insulator. We already know that shiny surfaces do not absorb radiation well reflecting heat back into the beaker, therefore will make the water warmer for longer. I think that the black paper will a poor insulator and will not keep the heat in the beaker because the colour black absorbs heat and transfers it away so I think black card will not be a good insulator. Also I think that the more amount of water I use in this experiment the more it will be insulated, and therefore stay warmer for longer. As we know already this as the outside of the water will cool down and the inside will stay warm. Apparatus o Thermometer o 150 ml beaker o 100 ml beaker o Silver foil o Black paper o Kettle o Sellotape o Scissors o Safety goggles o Stop clock o 250ml measuring Cylinder o Black paper o Tin foil o Cloth Diagram Method o I will first of all put ...read more.