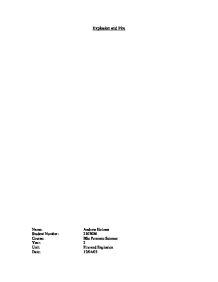 In this report the effects of fire and explosion are examined based on quantitative analysis using calorimetric methods.

Explosion and Fire Name: Andrew Holmes Student Number: 2103086 Course: BSc Forensic Science Year: 2 Unit: Fire and Explosion Date: 17/04/03 Summary In this report the effects of fire and explosion are examined based on quantitative analysis using calorimetric methods. The report focuses on a series of four tests using calorimetric instruments to obtain measurements, which are examined in a quantitative fashion. These tests are: the oxygen index test, the bomb calorimeter, the flash point test, and the flame stability test. The oxygen index for the various materials, calculated from the experimental results were found to be 16.67, 27.77 and 26.6 for Calico Med, Polyester and wool mix respectively. The flash points determined from the experimentation were, 99.5 oC, 72.0 oC and 70.5 oC for Cyclohexanone 99%, 4-Hydroxy-4-Methyl-2-Pentanon 99% and an unknown hydrocarbon respectively. The maximum flame speed for a natural gas-air flame in a horizontal tube was calculated to be 0.68ms-1, at a stiociometric ratio of 10:1, from the flame stability calculations. After calculations using data obtained from the bomb calorimter, the enthalpy of combustion for Perspex was determined to be 16.55 Kj.kg-1. 1.0 Introduction A fire is the results of a number of reactions between a combustible material (fuel) and oxygen, which may be from a variety of sources, most commonly air. During which heat and light are generated. Other products from a fire include solids and gases or vapors. Flames result from gasses or vapors burning. There are many reasons for investigating the properties of fire and it behavior. Through an understanding of the fundamental behavior of fire and fire dynamics a fire protection engineer can apply they're understanding at the design stage rather than relying on fire incidents to draw attention to inherent fire hazards. There are various methods available designed for the forensic analysis of fire and burning behavior, which include, oxygen consumption calorimetry, bomb calorimetry, pensky martins flash point apparatus, flame speed measurement, NIST smoke chamber and heat release rate measurements using a cone calorimeter. ...read more.

The containment vessel containing the sample was cleaned before and after each test, after this, the oil cup in the pensky-martins closed tester was filled with the sample to be tested. The lid was then replaced and sample was heated rapidly until the temperature was 25oC below the expected flash point at which point the rate of heating was slowed to 5oC per min. Every 2oC rise in temperature flashing was tested for, by lowering the flame for 1 second into the testing cup, ensuring that the sample is well stirred during the testing period. The first slight explosion due to vapor ignition is observed, that is the temperature which is recorded as the flash point for that sample. After the test the sample was disposed of into the waste can, the apparatus was then cooled using the low pressure air supply and the procedure repeated for each sample. The samples tested by this means were 4-Hydroxy-4-Methyl-2-Pentanon 99%, Cyclohexanone 99.8% and an unknown hydrocarbon liquid. 3.4 Oxygen Index Test - The Critical Oxygen Index Equipment The equipment was checked and calibrated before use. The sample was cut to the required size and the dimensions and weight recorded, then placed in the sample holder. After removing the chimney attached to the apparatus the sample holder was placed in position and the chimney replaced over the sample. Both switches 2.1 and 2.2 were turned on and 2.3 and 2.4 were adjusted until the total flow was approximately 18 liters per minute and the concentration of O2 and N2 was adjusted until it was reading 25 %, the sample was then purged for 30 seconds before igniting. After ignition the 2.3 and 2.4 were adjusted until the burning front was just maintained and the oxygen percentage recorded. After completion of the run 2.1 and 2.2 were switched off immediately and the chimney removed. Observations of the remnants of the sample were recorded and any way that it burnt. ...read more.

The polyester had the fastest burning rate of 37 seconds, however, it required quite a high volume concentration of oxygen to support combustion and maintain a burning front and therefore, had a high oxygen index. The flame tended to self-extinguish soon after combustion, this may have been due to the components of the material. Because of this it was difficult to maintain a steady burning front during experimentation. Error may have occurred as a result of this and the oxygen index measured may be inaccurate. The burning behaviour observed during experimentation of the samples was the most notable for the wool mix. The fabric burnt slowly, leaving charred material behind as the burning front progressed. Large amounts of smoke were also produced, this was most likely due to the charred residue formed. A small amount of charring and dripping of the material was observed for the polyester, and minimal charring was noted for the Calico med. Materials that char on heating such as the test fabrics, build up a layer of char on the surface of the material, which shields the unaffected fuel beneath. This was notably observed for the wool mix and the polyester. 6.0 Conclusions The aims and objectives of the report as stated at the beginning of the report were as follows: * To examine the dynamics of fire and explosion using calorimetric methods. * To quantitatively analyze the measurements obtained from calorimetric instruments. * To interpret the results obtained in each experiment using graphical analysis. The first aim was achieved by carrying out the four experiments using calorimetric methods. Behaviour of materials under combustible conditions, flash points using closed tester apparatus, enthalpy of combustion of a specimen in a bomb, flame stability and speed were examined. The second aim was achieved by presenting the results obtained in a quantitative fashion and interpretating the data using graphical representation and calculations, as shown in the section 3.0 (pg12). The third aim was achieved by discussing the graphical trends and explaining their significance, looking in particular at possible sources of error. ...read more.