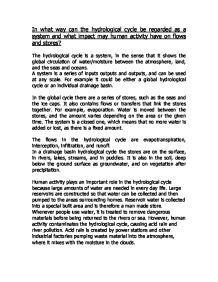 In what way can the hydrological cycle be regarded as a system and what impact may human activity have on flows and stores?

In what way can the hydrological cycle be regarded as a system and what impact may human activity have on flows and stores? The hydrological cycle is a system, in the sense that it shows the global circulation of water/moisture between the atmosphere, land, and the seas and oceans. A system is a series of inputs outputs and outputs, and can be used at any scale. For example it could be either a global hydrological cycle or an individual drainage basin. In the global cycle there are a series of stores, such as the seas and the ice caps. It also contains flows or transfers that link the stores together. For example, evaporation. Water is moved between the stores, and the amount varies depending on the area or the given time. ...read more.

Acid rain is created by power stations and other industrial factories pumping waste material into the atmosphere, where it mixes with the moisture in the clouds. As a result, the surface of the water becomes covered in a thick layer of algae, known as algal bloom. Farming the land stops vegetation, a store, and rain hitting the bare soil is not intercepted, and there are no plant roots in the soil to bind it together, so the water runs off the surface into the river, carrying a layer of soil with it. So in turn this stops interception, a flow/ transfer, of which vegetation is the most efficient interceptor and evaporator. However this is only the case in short, light precipitation. In urban areas such as a city, the concrete on the ground stops any type of precipitation escaping back to the rivers, through groundwater flow or throughflow. ...read more.

An example of this is lake Nasser in Eygpt. The effect on the river from the dam is that the river slows down and floods to the sides of the river into the flood plain. Another effect is that as the water in the lake is not moving it is evaporating a lot quicker, and all of the silt from the rest of the river that normally flows out to sea, or in the Niles case forms a delta, is obstructed and is making the lake shallower and shallower by the day. So to answer the question 'In what way can the hydrological cycle be regarded as a system and what impact may human activity have on flows and stores?', the hydrological cycle can be described as a closed system, and there are many human impacts on the flows and stores of the hydrological cycle, the main ones being the diversion of water in dams, and concreted areas. ...read more.