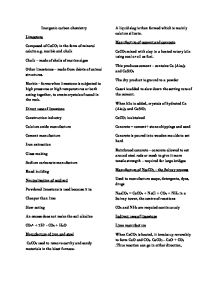 Inorganic carbon chemistry Limestone Composed of CaCO3 in the form of mineral calcite e.g. marble and chalk Chalk - made of shells of marine algae Other limestones - made from debris of animal structures. Marble - forms when limestone is subjected to high pressures or high temperatures or both acting together, to create crystals of caco3 in the rock. Direct uses of limestone Construction industry Calcium oxide manufacture Cement manufacture Iron extraction Glass making Sodium carbonate manufacture Road building Neutralization of acid soil Powdered limestone is used because it is: Cheaper than lime Slow acting An excess does not make the soil alkaline CO32- + 2H+ - CO2 + H2O Manufacture of iron and steel CaCO3 used to remove earthy and sandy materials in the blast furnace. A liquid slag is then formed which is mainly calcium silicate. Manufacture of cement and concrete CaCO3 mixed with clay in a heated rotary kiln using coal or oil as fuel. This produces cement - contains Ca (Alo2)2 and CaSiO3 The dry product is ground to a powder Caso4 is added to slow down the setting rate of the cement. When h2o is added, crystals of hydrated Ca (Alo2)2 and CaSiO3 CaCO3 is obtained Concrete = cement+ stone chippings and sand Concrete is poured into wooden moulds to set hard Reinforced concrete - concrete allowed to set around steel rods or mesh to give it more ...read more.

Na2CO3 - an important industrial chemical Used for: Manufacturing glass Treating brine Purifying water Manufacturing detergents and textiles Hydrogen carbonates Too unstable to exist as solids Contain HCO3- NaHCO3 - most common: found in indigestion remedies because it reacts with HCl (in stomach) which causes indigestion. NaHCO3 + HCl - NaCl + H2O + CO2 Added to plain flour as when the NaHCO3 is heated it releases CO2 which makes the cake rise NaHCO3 - Na2CO3 + H2O + CO2 Ca(HCO3)2 and Mg(HCO3)2 - cause hardness in water Hardness in water Rainwater dissolves CO2 A small fraction of CO2 reacts with H2O - H2CO3 H2O + CO2 - H2CO3 As this solution passes over rocks containing limestone, compounds called Mg or CaCO3 are produced and hey slowly dissolve in them CaCO3 + H2CO3 - Ca(HCO3)2 Some rocks may contain: Gypsum(CaSO4.2 H2O) Anhydrite(CaSO4) sparingly soluble in water and their presence makes the water hard Kieserite(mgso4.h2o) Hardness :temporary-removed by boiling - Caused by Ca or Mg HCO3s :permanent - more difficult to removed - Caused by Ca or Mg SO4s When water containing ca or Mg SO4 is evaporated, a white solid deposit is left behind called ca or mg SO4s or CaCO3 - causes furring in kettles - removed by dilute acid 2H+ + CO32- - CO2 + H2O Also blockages of hot water pipes are caused by a process like furring. ...read more.

More temperature = melting of ice caps , floods in low lying areas. Uses of CO2 CO2is bubbled into the liquid under pressure, which increases its solubility Fire extinguishers - CO2 is denser than air and forms a layer around the burning material. It covers the fire and starves it of O2. CO2 does not burn and so the fire is put out. Refrigerants - used because it is colder than ice and it sublimes. Special effects - dry ice is placed in boiling water and it forms thick clouds of white smoke. It stays close to the floor since CO2 is denser Heat transfer agents - in nuclear power stations Lab preparation of CO2 gas By reacting dil. HCl on CaCO3 (marble chip) CaCO3 +HCl - CaCl2 + H2O+ CO2 Properties of CO2 Physical properties Colorless gas Sparingly soluble in H2O Denser than air When bubbled in water, some dissolves slightly and some forms H2CO3 Supports the combustion of strongly burning substances as they burning substances as they break CO2 to C and O2 and get O2 to support the combustion. When co2 is bubbled through limewater, a white precipitate called caco3 is formed. CO2 + Ca(OH)2 - CaCO3 + H2O If CO2 is bubbled through this solution, the solution becomes clear because of the formation of Ca(HCO3)2 CaCO3 + CO2 - Ca(HCO3)2 CO2 reacts with strong alkalis to form carbonates. If excess CO2 is bubbled through a solution of an alkali then a white precipitate may be obtained. ...read more.