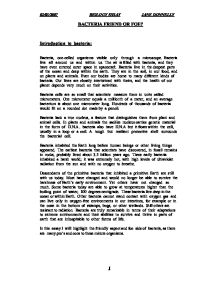 Introduction to bacteria: Bacteria, one-celled organisms visible only through a microscope. Bacteria live all around us and within us. The air is filled with bacteria, and they have even entered outer space in spacecraft. Bacteria live in the deepest parts of the ocean and deep within the earth. They are in the soil, in our food, and on plants and animals. Even our bodies are home to many different kinds of bacteria. Our lives are closely intertwined with theirs, and the health of our planet depends very much on their activities. Bacteria cells are so small that scientists measure them in units called micrometers. One micrometer equals a millionth of a meter, and an average bacterium is about one micrometer long. Hundreds of thousands of bacteria would fit on a rounded dot made by a pencil. Bacteria lack a true nucleus, a feature that distinguishes them from plant and animal cells. In plants and animals the saclike nucleus carries genetic material in the form of D.N.A . bacteria also have D.N.A but it floats within the cell, usually in a loop or a coil. A tough but resilient protective shell surrounds the bacterial cell. Bacteria inhabited the Earth long before human beings or other living things appeared. ...read more.

NITROGEN FIXATION: Bacteria play a key role in making soil fertile. They convert nitrogen in Earth's atmosphere into the nitrogen compound ammonia, which plants need to grow. Bacteria are the only organisms able to carry out this biochemical process known as Nitrogen Fixation. The bacteria able to fix atmospheric nitrogen usually live in association with plants, often integrated into the plant tissue. These are friendly bacteria BACTERIA IN FOOD: Most people would think bacteria in or on food can only be harmful. True, food poisoning caused by bacteria and their products is a serious problem, however, certain bacteria are safe in food, and are required for the desired taste and texture. Bacteria are commonly used in dairy products. The good bacteria in dairy products are introduced at a very simple level here. Sour cream and cr�me fresh are both the products of cream after bacteria were allowed to grow in it. The difference in flavour, texture and behaviour all result from the differences in bacteria required to produce the two products. Buttermilk is low in fat, cheese comes in many variations. Yogurt is probably one of the oldest forms of fermented milk. It is not dangerous to eat food containing bacteria. ...read more.

Chemosynthesis occurs in vents at the bottom of the ocean, where light is unavailable for photosynthesis but hydrogen sulphide gas bubbles up from below Earth's crust. Life can develop around these vents because bacteria use the hydrogen sulphide gas in changing carbon dioxide into organic nutrients. The hydrogen sulphide gas coming up from Earth's mantle is extremely hot, but bacteria in these vent communities are adapted to the high temperatures. MY CONCLUSION: When all facts are considered, bacteria are more helpful than harmful. Humans have wide variety of users, such as ; making cheese and butter, decomposing waste in sewage plants, antibiotics. Bacteria is also a best friend to our ocean, plants, animals, and air, it loves all the elements of our environment and is good to them! Bacteria have been able to survive without us, but we could never live without them! Therefore I would consider bacteria to be a friend! Reference: http:/Encarta.msn.com/encyclopedia/bateria.html Reference: http:/www.ncbi.nlm.gov/entrez/query.fcgi?cmd=Retrieve&db=PubMed&list_uid Reference: New York Times Science Q & A Reference: Cow & gate Premium baby formula (Probiotic) Reference: Biochemistry, Martin Carr and Bob Cordell, 1992, London Reference: Understanding Biology for advanced level, fourth edition, Glenn and Susan Toole, 1987, 1991, 1995, 1999, Stanley Thornes (publishers) London Reference: A-level Biology, W D Phillips and T J Chilton, 1989-2001, Oxford University Print, Oxford. ?? ?? ?? ?? 02/05/2007 BIOLOGY ESSAY JANE DONNELLY BACTERIA FRIEND OR FOE? I ...read more.