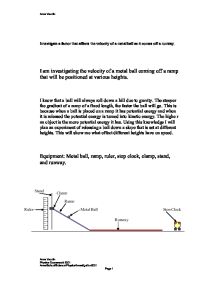 Investigate a factor that affects the velocity of a metal ball as it comes off a runway.

Investigate a factor that affects the velocity of a metal ball as it comes off a runway.

I am investigating the velocity of a metal ball coming off a ramp that will be positioned at various heights.

Method: The equipment was set up as shown. The clamp was set up at 5cm above the workbench. The length of the ramp was measured to 1.5m and marked off. The ball was then put at the top of the ramp and left to free roll down the ramp and along the runway. When the ball came off the ramp and started down the runway the clock was started and when the ball had covered the 1.5m of the runway the clock was stopped. This was done as accurately as possible to get a fair set of results. This was repeated 10 times with the clamp at 5cm high. The test was then repeated with the clamp set at 10cm, 15cm, 20cm, 25cm and 30cm. Each height was tested 10 times. All results were recorded.

If all this is done sensibly there should be no safety hazards.

If all this is done correctly I should get a good set of results that will be as accurate as I can possibly make them.

I will put all results in a table like the one below. The first column has the height of the clamp that holds the top of the ramp. This is measured in cm and the distance is taken from the bottom of the stand to a constant position on the clamp. The second column is for the results that I collect. I will put in all results then mark any odd results I have. They are all recorded in seconds. The third column is an average of all results. To get this average I will add up all the results I have for that height then divide by 10 (as that is the amount of results I will have). This will also be in seconds as it is using the results I have collected which will be in seconds. The last column is average speed. This is found by dividing the distance the ball travelled by the time it took as Speed = Distance/Time   For this test the ramp was 1.5m, so it will be   1.5m/average time  This will be in meters/second as the distance is measured in meters and the time is measured in seconds.

In this experiment I think that the higher the ramp is the faster the ball will go as there will be more potential energy to turn into kinetic energy. More kinetic energy is a faster speed. As I am measuring the speed of the ball, changing the height of the ramp will change the speed. I know that the higher an object is, the more potential energy it will have. This is because GravitationalPotential Energy = Mass x Gravity x Height

In this equation if the speed doubles the kinetic energy quadruples.

These two can be re arranged to give velocity:

This means that I can estimate the velocity the ball will have before doing the experiment. This estimate may not be accurate because there are many other factors that affect the velocity of a ball but it does give me a general idea of what to expect.

I think that my method gave me reliable results as they were quite close to my predicted results and as I did 10 tests for each height and all the results were quite similar for that height. From this I can say that my results are quite accurate. But they will never be as good as if I had done the test under strict laboratory conditions with better equipment, this would create a even smaller source of error.

If I had to redo this experiment or investigate it further and I had more time I would do more tests on different heights and do more tests for each height. This would mean I would have a more accurate set of averages and more of them to draw a graph from so I would get a better line of best fit. Using more heights would show me at what height the ball reached terminal velocity and it would make the top of my graph level off more. My method worked really well, I found out that height does affect the speed of a ball, so I wouldn’t change that. To find out what really has the most effect on a balls speed I could do more tests using the same method but changing some of the variables, for example mass of the ball or length of the ramp.

Also if it were possible I would use a light gate to measure the time it took for the ball to travel down the runway. This would eliminate the timing error which without special equipment is very hard to control.