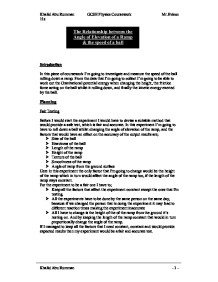 Investigate and measure the speed of a ball rolling down a ramp.

In this piece of coursework I’m going to investigate and measure the speed of the ball rolling down a ramp. From the data that I’m going to collect I’m going to be able to work out the Gravitational potential energy when changing the height, the friction force acting on the ball whilst it rolling down, and finally the kinetic energy exerted by the ball.

Before I would start the experiment I would have to devise a suitable method that would provide a safe test, which is fair and accurate. In this experiment I’m going to have to roll down a ball whilst changing the angle of elevation of the ramp, and the factors that would have an effect on the accuracy of the output results are;

Here in this experiment the only factor that I'm going to change would be the height of the ramp which in turn would affect the angle of the ramp too, if the length of the ramp stays constant.

For the experiment to be a fair one I have to;

Above are the preliminary results.

Selecting the most Suitable Apparatus

When looking at the preliminary results the golf ball traveled too fast for us to be able to stop the time accurately, the table tennis ball was too light so has gone off course most of the time, due to the air resistance, and that was enough to deflect it. The tennis ball was too big and I don’t think it would be a good idea to use it, as we would find it hard to place correctly on the starting point line, and it would take too much time which might lead to anomalies. But the squash ball to me was the most suitable ball to use, and it stays in its path all time which is in a straight line down the ramp. In the preliminary tests we used 3 cm think books to lift up the ramp, but I don’t think that that would be a good idea, because the books might be compressed a bit, which would decrease the height we are aiming to achieve. So I think I'm going to use building blocks that are 8.2cm in height each and that would cancel out the chance of any change in the height due to compression. When thinking about time, the most accurate stopwatch we can get would be a 2 d.p. stopwatch and that’s all we’ve got. There are lots of different types of ramps out there, with different types of surfaces but the only one that was available to me was a wooden ramp that has a groove going through it, to provide a path for the ball to roll through. Below is the apparatus that I'm going to use to do the experiment.

Secondly I predict that as the Gravitational potential energy increases, the kinetic energy also increases proportionally

Thirdly I predict that as the height of the ramp increases the G.P.E also increases proportionally

Fourthly I predict that as the speed of the ball (squared) increases the kinetic energy exerted is also increased proportionally.

So to work out the G.P.E I would use this formula;

But to work out the weight I would first have to use this formula;

To work out Kinetic energy I would use this formula;

And finally to work out the Friction force I would use;

As my main non constant value would be the height, I will have to choose the heights that I'm able to have using the building blocks. I will have six different heights which I think would give me a large range of results. The heights would be 8.2, 16.4, 24.6, 32.8, 41 and 49.2 centimeters. To work out how big the angles are I have to use this formula;

So the angles of the heights are;

I don’t think repeating any more test for results would make it more accurate cause I’ve already had carried out 5 samples of each test.

I think I have carried out a suitable range of results but there was an area for improvement as I could have investigated larger heights, which would mean larger angles.

Things that I would improve in this experiment are;

The whole experiment was a success in that I gained knowledge of things I didn’t know before, I have carried out the experiment safely, fairly and accurately.