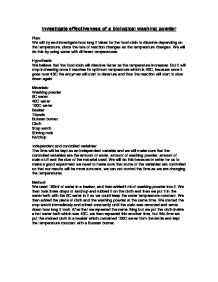 Investigate effectiveness of a biological washing powder Plan: We will try and investigate how long it takes for the food stain to dissolve depending on the temperature, since the rate of reaction changes as the temperature changes. We will do this by using water with different temperatures. Hypothesis: We believe that the food stain will dissolve faster as the temperature increases. But it will stop increasing once it reaches its optimum temperature which is 40C, because once it goes over 40C the enzymes will start to denature and thus the reaction will start to slow down again. Materials: Washing powder 5C water 40C water 100C water Beaker Tripods Bunsen burner Cloth Stop watch Stirring rods Ketchup Independent and controlled variables: The time will be kept as an independent variable and we will make sure ...read more.

We then took three drops of ketchup and rubbed it on the cloth and then we put it in the water bath with the 5C water in it so we could keep the water temperature constant. We then added the piece of cloth and the washing powder at the same time. We started the stop watch immediately and stirred constantly until the stain was removed and wrote down how long it took. After that we repeated the same thing but we put the cloth inside a hot water bath which was 40C, we then repeated this another time, but this time we put the stained cloth in a beaker which contained 100C water from the kettle and kept the temperature constant with a Bunsen burner. ...read more.

I think that if we did this experiment again and improved it by changing what we did wrong, we could make our results be more accurate and our hypothesis would be correct. Evaluation: There were a few things we could have improved in this experiment such as the beaker/cloth size, we could have repeated the experiment more times and used a food substance that was easier to measure since ketchup is fairly hard to. Another thing we could improve if we would do this experiment again would be that the person steering the cloth on the beaker should not be changed around, as that person keeps the same speed the whole time, and if we changed person every time, the results wouldn't be as accurate since the speed changes as the person steering changes. ...read more.