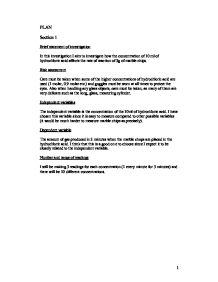 Investigate how the concentration of 10 ml of hydrochloric acid affects the rate of reaction of 3g of marble chips.

This was actually slower to react than 0.5 moles. The reason that it was so anomalous was because it may have been a large chip therefore with a smaller surface area than multiple small chips. Support for a firm conclusion Looking at the graphs, I think that I have support for a firm conclusion in that the curves of the graphs follow a pattern and they support my prediction. However I am not sure how true my results will be outside of the range within which I carried out my investigation. On the graphs it is noticeable that the curves on them get less and less steep until they become upwards sloping. If I carried on the experiment within concentrations down to say, 0.01 moles I may find that there is a point when the marble just doesn't react at all. At the other extreme, if I used an acid that was about 1000 moles it would probably produce less gas than 20 moles so if I had continued the experiment upwards I would have found the concentration of acid that produces the most gas. Improvements to the method To improve my range of results I could have done about 10 readings in a space of about 5 minutes so I will get a more accurate curve for my graphs and I would find out what would happen in a longer time span. Additional evidence To give extra support for my results I could carry out the same experiment but with a different substance such as magnesium. This would both improve the accuracy (see accuracy section) and give extra support for my results. 1 ...read more.