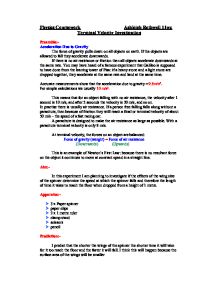 Investigate if the effects of the wing size of the spinner determine the speed at which the spinner falls and therefore the length of time it takes to reach the floor when dropped from a height of 1 metre.

Physics Coursework Ashleigh Rothwell 11wx Terminal Velocity Investigation Preamble:- Acceleration Due to Gravity The force of gravity pulls down on all objects on earth. If the objects are allowed to fall they accelerate downwards. If there is no air resistance or friction then all objects accelerate downwards at the same rate. You may have heard of a famous experiment that Galileo is supposed to have done from the leaning tower of Pisa: if a heavy stone and a light stone are dropped together, they accelerate at the same rate and land at the same time. Accurate measurements show that the acceleration due to gravity = 9.8m/s�. For simple calculations we usually 10 m/s�. This means that for an object falling with no air resistance, the velocity after 1 second is 10 m/s, and after 2 seconds the velocity is 20 m/s, and so on. In practise there is usually air resistance. If a person free falling falls along without a parachute, then because of friction they will reach a final or terminal velocity of about 50 m/s - the speed of a fast racing car. A parachute is designed to make the air resistance as large as possible. With a parachute terminal velocity is only 8 m/s. At terminal velocity, the forces on an object are balanced: Force of gravity (weight) = Force of air resistance (Downwards) ...read more.

For example I could have used a length of 1.1, 1.2, 1.3, 1.4, etc. This would have been to time consuming and the differences in the times so small that my results would have been difficult to plot. However the scattered points produced by these extra experiment could have gone a long way to confirming the curved shape of the graph. Although I thought the first point was an anomalous point due to the fact that I made an assumption that it was a straight line graph, once I had established that it was a curve most of the points seem to fall on or close to the curve. The three centimetre length of wing seems to have a time that is a little long and if I had time I would have liked to have repeated this result again. To extend my investigation in the future I could see if other distances other than 1 metre would give the same results if I chose a much greater distance than 1 metre I could ensure that terminal velocity had been reached. Also a greater distance than 1 metre would mean longer times and therefore my reaction would have a less significant effect. I could also investigate what other variables affect the spinner for example it would be interesting to see what effect weight would have on the time the spinner takes to fall 1 metre if any effect at all. This would show if there was a relationship between weight and time taken. ...read more.