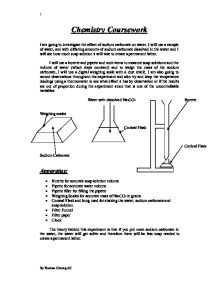 Investigate the effect of sodium carbonate on water.

Chemistry Coursework I am going to investigate the effect of sodium carbonate on water. I will use a sample of water, and with differing amounts of sodium carbonate dissolved in the water and I will see how much soap solution it will take to create a permanent lather. I will use a burette and pipette and such items to measure soap solutions and the volume of water (which stays constant) and to weigh the mass of the sodium carbonate, I will use a digital weighing scale with a dust shield. I am also going to record observations throughout the experiment and also try and keep the temperature readings using a thermometer to see what effect it has by observation or if the results are out of proportion during the experiment since that is one of the uncontrollable variables. Water with dissolved Na2CO3 Burette Weighing scales Conical Flask Conical Flask Sodium Carbonate Apparatus: * Burette for accurate soap solution volume * Pipette for accurate water volume * Pipette filler for filling the pipette * Weighing Scales for accurate mass of Na2CO3 in grams * Conical Flask and bung used for shaking the water, sodium carbonate and soap solution. ...read more.

The key factors in this experiment are: * Amount of sodium carbonate-change * Amount of water-constant * Concentration of soap solution-controllable & variable * Water type (source) / hardness- controllable & variable * Temperature-uncontrollable & variable * Shaking intensity-controllable to a certain degree Reactions and equations The calcium and ions in the water and the magnesium ions react with (sodium) carbonate ions. Calcium ions + Carbonate ions Calcium Carbonate (From hard water) + (From sodium Carbonate) Ca2+ (aq) + CO32- (aq) CaCO3 (s) Another name for sodium carbonate is washing soda, because it was used for washing up when all of it was done using soap. This method of softening is called precipitation. The sodium carbonate removes the calcium ions from the water as a precipitate of calcium carbonate. Calcium ions + Stearate ions Calcium Stearate (From hard water) + (From soap) (scum) Ca2+(aq) + 2St-(aq) CaSt2(s) Another way of removing the hardness from the water is to add soap. Sodium stearate is the soap we are going to use since it is quite common in soap. ...read more.