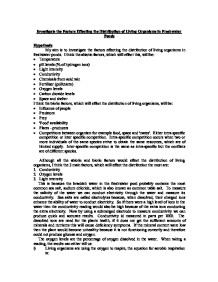 The energy produced is used for growing and repairing cells and without this energy the living organism could not survive. If there is a low level of oxygen in the water then respiration will still take place but not aerobic but anaerobic respiration. This means that there is no oxygen available and it is not the best way to convert glucose into energy as it does no produce nearly as much energy, the equation for it is: Glucose Energy + Lactic acid If oxygen in the water stays at a low level then soon the living organisms will die. ii) Decaying matter is using the oxygen and releasing carbon dioxide in the process iii) Bacteria which decomposes the organic matter, for example dead leaves and faeces, also uses the oxygen and produces carbon dioxide in the process. iv) There is a low rate of photosynthesis, if this happens then the living organisms would be in a serious situation. This is because if the oxygen levels are and there are a lot of living organisms in the water then anaerobic respiration might take place, which will kill them. ...read more.

This would then jeopardise the quality of living for the living organism. Temperature is connected with light intensity because thermal energy and light both come from the sun. The rate of photosynthesis can be affected by temperature. At about the temperature of 45 degrees Celsius the heat destroys the chlorophyll enzymes. However I don't think that this will be a major factor in this investigation as the mean temperature is 10.6 degrees Celsius in the Isle of Wight. Conductivity means how many ions are dissolved in the water the main salt in the sea is sodium chloride, which constitutes about 85% of the sea salts. Some others are magnesium, calcium and potassium. These minerals are essential for healthy growth in the plant. If the plant is not healthy then it can not photosynthesise Salinity varies from nearly zero in continental waters to about 41 parts per 1000 in the Red Sea, a region of high evaporation, and more than 150 parts per 1000 in the Great Salt Lake. In the main ocean, salinity averages about 35 parts per 1000,1 ?? ?? ?? ?? ...read more.