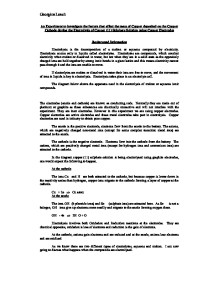 Investigate the factors that affect the mass of Copper deposited on the Copper Cathode during the Electrolysis of Copper (11) Sulphate Solution using Copper Electrodes.

An Experiment to investigate the factors that affect the mass of Copper deposited on the Copper Cathode during the Electrolysis of Copper (11) Sulphate Solution using Copper Electrodes Background Information Electrolysis is the decomposition of a molten or aqueous compound by electricity. Electrolysis occurs only in liquids called electrolytes. Electrolytes are compounds, which conduct electricity when molten or dissolved in water, but not when they are in a solid state as the oppositely charged ions are held together by strong ionic bonds in a giant lattice and this means electricity cannot pass through it and the ions are unable to move. If electrolytes are molten or dissolved in water their ions are free to move, and the movement of ions in liquids is key in electrolysis. Electrolysis takes place in an electrolyte cell. The diagram below shows the apparatus used in the electrolysis of molten or aqueous ionic compounds. The electrodes (anode and cathode) are known as conducting rods. Normally they are made out of platinum or graphite as these substances are chemically unreactive and will not interfere with the experiment. They are inert electrodes. However in this experiment we are using copper electrodes. Copper electrodes are active electrodes and these metal electrodes take part in electrolysis. Copper electrodes are used in industry to obtain pure copper. The anode is the positive electrode, electrons flow from the anode to the battery. The anions, which are negatively charged non-metal ions (except for some complex transition metal ions) are attracted to the anode. The cathode is the negative electrode. Electrons flow into the cathode from the battery. The cations, which are positively charged metal ions (except for hydrogen ions and ammonium ions) are attracted to the cathode. In the diagram copper (11) sulphate solution is being electrolysed using graphite electrodes, one would expect the following to happen. At the cathode The ions Cu and H are both attracted to the cathode, but because copper is lower down in the reactivity series than hydrogen, copper ions migrate to the cathode forming a layer of copper at the cathode. ...read more.

sulphate solution of the same concentration, the experiment should always be left out for the same amount of time, 20 minutes, and the experiments should be kept in equal temperatures. The experiment should be carried out in the uniform conditions of a laboratory and the same, accurate equipment should be used for each experiment, set up in exactly the same way each time. Also to ensure that the copper cathode is always pure the same cleaning method should be adopted each time. Accuracy To try and achieve very accurate results the cathode should be cleaned very thoroughly each time (to ensure the new copper will stick to the old copper), the ammeter should be carefully observed during the experiment so that if the current fluctuates it can be immediately put back using the variable resistor. Also the electronic balance should be carefully wiped between readings to ensure that copper (11) sulphate solution, water or any other substance is not left on the balance from previous readings as this will affect the reading. One must ensure that the cathode is properly dried before it is weighed so that we can obtain an accurate result. And finally one must make sure that the electrodes are exposed to the same amount of copper (11) sulphate solution so they must be immersed to the same depth and in an equal amount of copper (11) sulphate solution each time. Earlier Work A pilot experiment was carried out prior to the investigation to help practise setting up, carrying out and observing the experiment. A current of 0.3 amps was used. The same cleaning method was used as in the investigation and the cleaned cathode was weighed as a mass of 1.26g, and then connected to the negative terminal of the power pack. The anode was connected to the positive terminal. The copper cathode was immersed into at depth of 4 cm into the copper (11) ...read more.