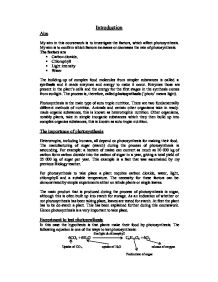 Investigate the factors, which affect photosynthesis.

Introduction Aim My aim in this coursework is to investigate the factors, which affect photosynthesis. My aim is to confirm which factors increases or decreases the rate of photosynthesis. The factors are * Carbon dioxide, * Chlorophyll * Light intensity * Water The building-up of complex food molecules from simpler substances is called a synthesis and it needs enzymes and energy to make it occur. Enzymes those are present in the plant's cells and the energy for the first stages in the synthesis comes from sunlight. The process is, therefore, called photosynthesis ('photo' means light). Photosynthesis is the main type of auto tropic nutrition. There are two fundamentally different methods of nutrition. Animals and certain other organisms take in ready-made organic substances, this is known as heterotrophic nutrition. Other organisms, notably plants, take in simple inorganic substances which they then build up into complex organics substances, this is known as auto tropic nutrition. The importance of photosynthesis Heterotrophs, including humans, all depend on photosynthesis for making their food. The manufacturing of sugar (starch) during the process of photosynthesis is astounding. For example: a hectare of maize can convert as much as 10 000 kg of carbon form carbon dioxide into the carbon of sugar in a year, giving a total yield of 25 000 kg of sugar per year. This example is a fact that was ascertained by my previous Biology teacher. For photosynthesis to take place a plant requires carbon dioxide, water, light, chlorophyll and a suitable temperature. The necessity for these factors can be demonstrated by simple experiments either on whole plants or single leaves. The main product that is produced during the process of photosynthesis is sugar, although this is often built up into starch for storage. As an indication of whether or not photosynthesis has been taking place, leaves are tested for starch. At first the plant has to be de-starch a plant. ...read more.

I have also gained knowledge that carbon dioxide is a limiting factor. It reduces the rate of photosynthesis. Evaluation My prediction that I had made in the planning was correct, as we know that the leaf that contained a carbon dioxide reducing compound, there were no starch present after conducting the starch experiment. Hence, I had stated that photosynthesis would not take place if there were no carbon dioxide; therefore this is accurate, as no photosynthesis had taken place in this part on the leaf, whereas in the other there were signs of starch, which shows that photosynthesis was taking place. During the experiment there were no problems or errors. The two compounds Soda lime and Sodium Hydrogen Carbonate, which were used to reduce the amount of carbon dioxide and slowly break up to produce carbon dioxide respectively. These two substances/solutions were left for several hours to make sure that they would take affect. The 2 conical flasks act as a mini habitat, giving the effect of a green house effect, consequential in the increase in temperature and increase of light intensity, the factor had very little effect on the experiment, but it would effect a more elaborate experimentation. The rate of depletion in carbon dioxide influences the rate of photosynthesis and makes it stop at a certain time limit. Hence it is a limiting factor. Improvements During this experiment many bits and pieces could have been added in, this would have given us an accurate result. The following points show some improvements that could have been made: * To make sure the rubber bungs in both conical flasks were air tightened, they been injected with Vaseline to make sure that the gap was airtight and no gases would enter or escape the conical flask. This has been shown on the diagram that was shown at the beginning of this experiment. Factors that affect photosynthesis. ...read more.

* As soon as the first bubble appears the counting begins. * The numbers of bubbles produced every 5 minutes are recorded. * The same steps are taken into deliberation, but this time the temperatures rise till 540c. Results The following table shows the three trails and the average number of bubbles that were recorded during the experiment: Temperature (0c) Trial 1 (number of bubbles) Trial 2 Trial 3 Average 35 238 240 242 240 37 402 394 398 398 40 480 479 481 480 43 540 541 539 540 53 - - - - Using the formula mentioned above, I found out the rate of photosynthesis, which was much easier to plot on graph paper: Temperature (0c) Rate of photosynthesis (Bubbles/Sec) 35 4 37 6.633 40 8 43 9 53 - Graphs The tables above have been plotted on the graphs on the next few pages: Conclusion The prediction I had made was correct. As the temperature increased the rate of photosynthesis increased as well. But as I had mentioned that it has a limit, I did nto seem to come across a limit. Evaluation Counting bubbles was an indirect method of measuring the rate of photosynthesis. The following points show why the experiment was not so accurate: * The pressure within the water may have affected the emission of bubbles. * The size of the leaf may have affected readings due to the number of stomata pores. * The bubbles did not have a fixed size. The sizes were variable. * The pondweed was contained in a microenvironment; the test tube may have affected the emission of bubbles. * The Elodea had many branches; their branches may have trapped oxygen bubbles beneath them. * Some of the bubbles were expected to have merged together. Therefore there were not a large number of bubbles. * KHCO3 was added at the beginning of the experiment and was not changed at all. KHCO3 affected the first few results but may not have had the same effect upon the last result because it had been used up. ...read more.