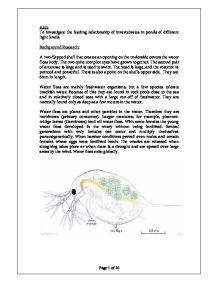 Investigate the feeding relationship of invertebrates in ponds of different light levels.

Aim: To investigate the feeding relationship of invertebrates in ponds of different light levels. Background Research: A two-flapped shell that creates an opening on the underside covers the water fleas body. The two quite complex eyes have grown together. The second pair of antennae is large and is used to swim. The head is large, and the rostrum is pointed and powerful. There is also a point on the shells upper side. They are 6mm in length. Water fleas are mainly freshwater organisms, but a few species tolerate brackish water. Because of this they are found in rock pools close to the sea and in relatively closed seas with a large run-off of freshwater. They are normally found only as deep as a few meters in the water. Water fleas eat plants and other particles in the water. Therefore they are herbivores (primary consumer). Larger creatures, for example, phantom midge larvae (Carnivores) feed off water fleas. With some females the young water fleas developed in the ovary without being fertilized. Several generations with only females can occur and multiply themselves partenogenetically. When harsher conditions prevail even males and certain females whose eggs were fertilized hatch. The ovaries are released when sloughing takes place or when there is a drought and are spread over large areas by the wind. Water fleas exist globally. An ecosystem is defined as 'a self-contained interacting community of organisms, considered with the environment in which these organisms live and react'. Freshwater ecosystems include such water bodies as lakes, rivers, ponds and streams. They do not include saltwater bodies such as oceans or seas. A pollutant may be considered as any substance or form of energy, usually an unwanted by-product or waste, which is released into the environment as a result of human activities, that alters the chemical, physical and biological characteristics of the environment. Such substances may be solids, liquids or gases. ...read more.

It is crucial that we dispose of these chemicals safely and not to pour them into the pond, as it toxic to the pond creatures and could cause some ecological havoc. Precautions will also have to be taken, as we will be working close to an electric power station. Which has a great potential of danger in itself. Glass apparatus must be handled with care so that they do not break. If they do, that is also another hazard, and should be cleared up and disposed of in an appropriate fashion. This is a table that shows the severity of an incident happening and the likelihood. They are scaled from 1 to 5, 5 being the most severe. They are then multiplied together to give the outcome. Risk Likelihood Severity Chance Disturbing wildlife 4 1 4 Diseases 4 3 12 Chemicals 3 5 15 Glass 2 3 6 Variables The independent variable of this experiment is the intensity of light. This will be changed and should cause changes in my dependant variables. Light intensity should be a lot greater in the meadow pond than in the woodland pond this is because in the woodland pond the amount of light is blocked by the vast number of trees that are there. In the meadow pond there are no trees blocking the light and therefore there shall be a greater light intensity in the meadow pond. The intensity of the light shall be measured by using a light meter. The dependant variables of this experiment are the changes in the population of invertebrates, which should occur as a result of changing the independent variable. In order to make this a fair test I am going to have to try and keep all other variables constant. This is going to be very hard for me to do as the pond is outdoors and controlling variables is not possible. ...read more.

It is still has a good chance of human error, but there will be an increase in the accuracy of my results. Another idea would be to create an artificial pond under controlled conditions. This would be because then we would be able to control the other variables, giving us more reliable results. Although this would probably take years of research and would be an idea for future research. Anomalous Results By referring to the table of results you can see two separate results that are in bold. These indicate anomalous results. They are anomalous because they are very different from the other readings that I had taken. This should not occur because there should be readings for each pond. Another anomaly that I had noticed in my results was the fact that in two ponds we had still found the same number of water fleas. Although in general there were more in the meadow pond, there were occasions where there were 1 or 2 observations that were the same, this can contradict the reliability of my results. Limitations Another limitation in my method could be the time of the year. First of all it was March and as it was very cold, the experiment was rushed and most probably not done to a high degree of accuracy. Another factor could have been that some of the freshwater invertebrates could have either died or be hibernating due to the cold weather. I had taken the temperature of the water during the experiment and it turned out to be 5.1`c. We also had a great problem with controlling the other variables in outdoor conditions. Conclusion Validity Taking into account the inaccuracies and problems mentioned above it can be concluded that although the results are not accurate enough to give a reliable conclusion, we can say that the results obtained were 'fairly' reliable with about a 20% of human error. My hypothesis was correct and we can say there is a relationship between the number of water fleas in freshwater ponds and the intensity of light. ...read more.