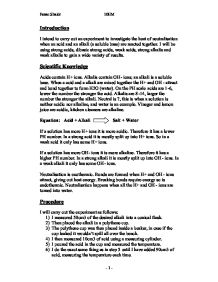 Investigate the heat of neutralisation when an acid and an alkali (a soluble base) are reacted together.

Introduction I intend to carry out an experiment to investigate the heat of neutralisation when an acid and an alkali (a soluble base) are reacted together. I will be using strong acids, dibasic strong acids, weak acids, strong alkalis and weak alkalis to gain a wide variety of results. Scientific Knowledge Acids contain H+ ions. Alkalis contain OH- ions; an alkali is a soluble base. When a acid and a alkali are mixed together the H+ and OH- attract and bond together to form H2O (water). On the PH scale acids are 1-6, lower the number the stronger the acid. Alkalis are 8-14, larger the number the stronger the alkali. Neutral is 7, this is when a solution is neither acidic nor alkaline, and water is an example. Vinegar and lemon juice are acidic, kitchen cleaners are alkaline. Equation: Acid + Alkali Salt + Water If a solution has more H+ ions it is more acidic. Therefore it has a lower PH number. In a strong acid it is mostly split up into H+ ions. So in a weak acid it only has some H+ ions. If a solution has more OH- ions it is more alkaline. Therefore it has a higher PH number. In a strong alkali it is mostly split up into OH- ions. In a weak alkali it only has some OH- ions. Neutralisation is exothermic. Bonds are formed when H+ and OH- ions attract, giving out heat energy. Breaking bonds require energy so is endothermic. Neutralisation happens when all the H+ and OH- ions are turned into water. ...read more.

The amount of heat energy given off when Hydrochloric acid and Sodium Hydroxide react is 57 KJ/ Mol-1. The reason why the heat of neutralisation is lower than for HCL + NaOH maybe because the NaOH may have had more OH- ions than KOH, the NaOH didn't have to break bonds since it was almost completely ionised. When bonds are formed energy is giving off and when bonds are broken energy is needed to break them, these determine overall how much heat energy is giving off. KOH is still a strong alkali but not as strong as NaOH meaning that NaOH has more OH- ions than KOH when not mixed with an acid. When more acid is added after the neutralisation has happened the temperature of the solution drops because the same amount of heat energy has to heat up more solution. Sulphuric Acid (Dibasic) + Sodium Hydroxide (Strong) Neutralisation happened when 30 cm3 of acid was added to 50 cm3 of alkali. Sulphuric Acid is dibasic, so has twice the amount of H+ ions, this is why the neutralisation point happens when only 30cm3 of acid is added. The acid doesn't have to break many bonds because it is almost completely ionised and this also applies to the alkali, that is the reason it gave off 105.8 KJ/Mol-1. When the H+ and OH- combined they gave out heat energy, energy is needed to break bonds but the sulphuric acid and Sodium Hydroxide didn't have to break many bonds, they mainly formed bonds resulting in such a high amount of heat energy given off. ...read more.

Therefore my results were fairly accurate even though I was using a very basic set of apparatus. The value I obtained for CH3COOH and NaOH was 73.777 KJ/Mol-1, the true value is 55.2. This is a large error, this may have happened because the thermometer was faulty since for that experiment I used a different thermometer. Also it could have been because of human error or inaccurate measuring equipment. The other combinations of acids and alkalis were quite accurate and only varied slightly to there true values. My results supported my predictions but not completely my prediction on weak acid and strong alkali and vice versa since the CH3COOH and NaOH results were largely inaccurate. Overall the results support my conclusion. If I were to carry out the same experiment out again to improve it I would have all the amounts of acid needed in separate beakers (9 beakers of 10cm3 of acid) to avoid wasting time when carrying out the experiment. If possible it would make the experiment more accurate if the room temperature was kept the same. Also that I would always use the same set of apparatus, especially the thermometer. If the solutions were being measured with a pipette or burette it would be more accurate than if a measuring cylinder was used. Further Work Using different acids and alkalis I could do a similar experiment. Put 100cm3 of acid in a beaker and add a few drops of phenolphthalein and place a thermometer in it. Then add alkali every 5cm3 using a syringe, when neutralisation occurs the solution will become pink. Record the temperature every time the alkali is added. Then workout the heat of neutralisation, this value will be more accurate than the last experiment. ...read more.