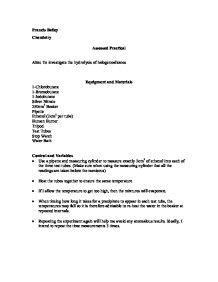 Investigate the hydrolysis of halogenoalkanes.

Francis Bailey Chemistry Assessed Practical Aim: To investigate the hydrolysis of halogenoalkanes Equipment and Materials 1-Chlorobutane 1-Bromobutane 1-Iodobutane Silver Nitrate 250cm3 Beaker Pipette Ethanol (2cm3 per tube) Bunsen Burner Tripod Test Tubes Stop Watch Water Bath Control and Variables * Use a pipette and measuring cylinder to measure exactly 2cm3 of ethanol into each of the three test tubes. (Make sure when using the measuring cylinder that all the readings are taken below the meniscus) * Heat the tubes together to ensure the same temperature * If I allow the temperature to get too high, then the mixtures will evaporate. * When timing how long it takes for a precipitate to appear in each test tube, the temperatures may fall so it is therefore advisable to re-heat the water in the beaker at repeated intervals. * Repeating the experiment again will help me avoid any anomalous results. Ideally, I intend to repeat the time measurements 3 times. Halogenoalkanes react with an aqueous solution of hydroxide ions according to the equation: RX + OH- ? ...read more.

However, it is worth noting that some chlorinated organic compounds e.g. dioxin, 2,4,5-trichlorophenoxyethanoic acid (Agent Orange) and polychlorinated biphenyls (PCB's) can be extremely poisonous. * Ethanol is highly flammable, so I will aboid exposing it to direct flame throughout the experiment. * Wear eye protection at all times. Prediction for Experiment Due too the mechanism of being nucleophilic attack, the bond enthalpy is the important factor of the reaction because it is the Carbon-Halogen bond that is the major determinant in terms of how willing a halogenoalkane will be to undergo nucleophilic substitution; much more so than the size of the +(ve) charge By looking at the bond enthalpies of the three chemicals, it is possible to see that the bond enthalpies decrease from C-Cl to C-I. Bond Bond Enthalpy /kJ mol-1 C-Cl 346 C-Cl 290 C-I 228 As a consequence of this difference in bond enthalpy, I predict that the 1-iodobutane will be quickest to form a precipitate by being displaced fastest. Next I predict will be the 1-bromobutane and the 1-chlobutane will be the last to form a precipitate because it has the highestt bond enthalpy. ...read more.

5. Add a bung to the top of test tubes 1to3 to avoid loss of solution due to precipitation. 6. Record the time with three identical timers (same margin of error) and stop the timer when it's corresponding test tube displays a change. i.e. formation of a precipitate. 7. Put your results into a table Evaluation In this experiment, I felt I was able to obtain results which confirm my prediction and show 1-chlorobutane as the slowest to form a precipitate and 1-iodobutane as the fastest to form a precipitate. Errors Maintaining the temperature in the beakers at 600c was difficult but I don't think this was a major error since the deviations from the optimum temperature were slight and all the beakers would have undergone any temperature changes at the same time so I don't think this had a big effect on my results. Improvements If I did this experiment again, I would definately do repeats of the experiment in order to be able to find an average result and look for a definite correlation between time taken for precipitate to form and bond enthalpy of the halogenolakane in question. ...read more.