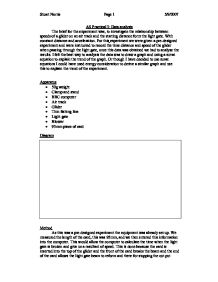 Investigate the relationship between speeds of a glider on an air track and the starting distance form the light gate.

The brief for the experiment was, to investigate the relationship between speeds of a glider on an air track and the starting distance form the light gate. With constant distance and acceleration. For thisexperiment we were given a pre-designed experiment and were instructed to record the time distance and speed of the glider when passing through the light gate, once this data was obtained we had to analyse the results. I felt the best way to analysis the data was to draw a graph and using a suvat equation to explain the trend of the graph. Or though I have decided to use suvat equations I could have used energy consideration to derive a similar graph and use this to explain the trend of the experiment.

As this was a pre-designed experiment the equipment was already set-up. We measured the length of the card, this was 95mm, and we then entered this information into the computer. This would allow the computer to calculate the time when the light gate is broken and give us a resultant of speed.

The experiment caused little difficulties because it was pre-designed and set up. However the data range of distance from light gate had to be chosen by us. We decided on a range of 1000mm to 500mm from the light gate. This is because below 500mm the light gates readings become very inaccurate and fluctuant between readings, therefore giving a poor average result.

See results and page   and.

The graph that the results provide was a straight-line graph this was no surprise because I had calculated this outcome.

The S.U.V.A.T equation that can be used to predict that the graph would be a straight line is V2=U2S+A. this can also be used to calculate any velocity for this experiment as long as the distance, acceleration and start speed are all known.