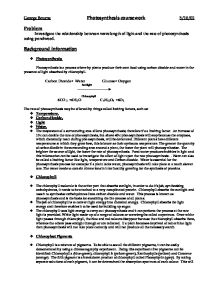 Investigate the relationship between wavelength of light and the rate of photosynthesis using pondweed.

This will be repeated for all the other colour filters, which are blue, green, magenta and yellow. The wavelength of the coloured light is the independent variable, which will change as the filter is changed. The light filters will be placed in front of the ray box, so that only the colour of the filter is the colour light coming from the ray box. Special care must be taken in assuring that no other colours of light are being admitted from the ray box, this will cut down on the chance of any anomaly's. By using this variable the different wavelengths can be investigated and experimented with. The results produced from the experiment need to have a high level of accurate, which is consistently maintained through out the experiment. This is important in order to investigate the relationship between the different wavelengths of light in the visible light spectrum and the rate at which photosynthesis takes place. Therefore we need to make sure that everything in the experiment is carried out fairly. The room in which the experiment will take place should have no other light source in it apart from the ray box. So that the only light, which comes into contact with the Canadian pondweed, is from the ray box it. To ensure more accuracy in this experiment it I'm going repeat this experiment at least once, so a firm conclusion can be drawn from it. This will reduce the chance of any anomalies results. Observations After one minute, the total number of bubbles produced by the pondweed. Colour of light Red Green Blue Yellow Magenta White 1st run through 20 5 29 10 20 30 2nd run through 30 8 32 16 26 33 The table above shows that from the 2nd run through of the experiment, showed that blue light produced the most bubbles. ...read more.

To event this the same ndweed must be used each time. Anim rtant factor which c , 7?"f""?f Le in temperature increases the rate of photosynthesis; therefore the results may not be ~;:ir" accurate or reliable. The temperature of the water must be controlled and could be achieved by '0 changing the water after each experiment. This would ensure that the water tempera~ was kept constant and fairer results produced. Yellow light could have produced a large volume of oxygen, more than blue because the chlorophyll in the pond weed could have contained more accessory pigments, which a~rb other colours which chlorophyll a, does not. On the whole my results were fairly accurate, yet they were not precise enough to draw a firm conclusion with evidence to support it. The different wavelengths of white lights produced reliable results except blue light. The temperature of the water or the surrounding light could have affected the results. To minimise the risk of inaccurate results to provide reliable evidence for a conclusion, control the water temperature of the pondweed in the test tube and carry out the experiment in a completely dark room where no light can be absorbed by the pondweed from the surroundings. The experiment was repeated but to provide fIrmer evidence for the conclusion repeat more than twice. To provide additional evidence for the conclusion and to extend the enquiry further, a wider variety of wavelengths could be experimented with such as cyan and as well as observing the volume of oxygen given off, the pondweed could be tested for the amount of starch produced. Starch can be tested for using iodine; if the iodine goes blue/black then starch is present. All observations carried out in the investigation must be done with accuracy and precision in order to produce reliable results, which can be used to draw a firm conclusion. V' G (p ...read more.

***The candidate has obtained some usable results in a notoriously difficult to carry out experiment, due to the problem of actually obtaining oxygen bubbles from the biological material. Under current marking guidelines there are some sections that should be included e.g. risk assessments.

To improve
Planning
The planning would be improved by the addition of some carefully selected references. These could be referred to in the conclusion to help with the predictions.
The key variables in the experiment could be considered more carefully so that the results would be more reliable. The water temperature and the concentration of carbon dioxide in the water were not considered. Counting of bubbles is not a very reliable way of obtaining the data. The candidate could have devised a method for measuring the volume of gas evolved.
There needs to be a risk assessment included.
Obtaining results.
The experiment seems to have been carried out well but the results need to recorded in a clearly headed table with all the correct units. There should be at least three replicates.
Analysis and Evaluation
The patterns in the results were described well and some attempt was made to explain these biologically. The graph should be included. The evaluation needed more detailed suggestions included for improving the reliability of the method and extending the work.