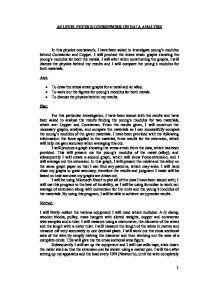 For this particular investigation, I have been issued with the results and have been asked to analyse the results finding the young’s modulus for two materials, which are: Copper and Constantan. From the results given, I will construct the necessary graphs, analyse, and compare the materials so I can successfully compare the young’s modulus of the given materials. I have been provided with the following information: the force applied to the material, three results for the extension, which will help me gain accuracy when averaging this out.

I will produce a graph showing the stress-strain from the data, which has been provided. This will present me the young’s modulus of the metal (alloy), and subsequently I will create a second graph, which will show Force-extension, and I will average out the extension. In this graph, I will present the metal and the alloy on the same graph paper so that I can find any patterns, which may arise. I will hand draw my graphs to great accuracy; therefore the results and judgment I make will be based on how accurate my graphs are drawn out.

From my graphs, I will find out the gradient and therefore be able to work out young’s modulus by the formulae above. I believe that young’s modulus for constantan will be high because I consider from the evidence provided that it will be able to take more strain then the copper (crystalline). I deem this simply because constantan being an alloy can take more of a load then a pure metal. Here is a typical example of a stress train graph: (obtained from my physics textbook) 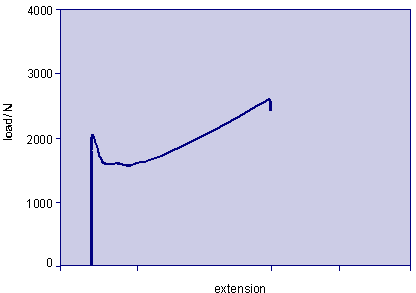 I will be using the following:

I will ensure that I keep this a safe experiment by:

The experiment in general had gone according to plan. I’m pleased with what I had found out through the results as I believe my prediction was correct and backed up by the results from the graph I had achieved. I believe that repeating the experiment three times meant that I had accurate results as from the average extension I plotted the graphs. Concluding this experiment I had found out that constant had the higher young’s modulus due to it being an alloy and containing the 40% of Nickel which gives it the strength property. Copper however, had been more flexible being a pure metal the atoms were easily dislocated and this resulted in copper breaking very easily as it had a small elastic limit.

Improvements-IF TO DO IT AGAIN

I had obtained information from the following resources:

This is a well structured and well written report.
1. There is a running commentary that needs to be removed.
2. There is information that is in the wrong section.
3. The evaluation needs to give ways to overcome problems with the methods and to suggest further research opportunities.
****