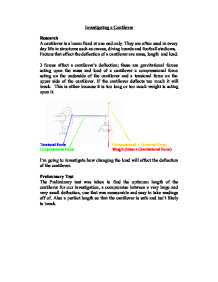 The odd results came from things such as a member of our group knocking the pin as they took the load on and off or the steadiness off my hand. To prevent this from happening we could have attached the pin to the cantilever more efficiently, it could have been tied on with string. Also a different member of the group could have taken the results, a member with a steadier hand. Ways that you could improve the experiment are you could tie the pin on with string to avoid knocking it. You could also, with a clamp and a stand make sure that the ruler was always at a 90� to the floor and that it was always in exactly the same place. You could make the results more accurate by taking 5 readings instead of 3 per weight and take an average from that. I would extend the experiment by changing the material of the cantilever to plastic, metal or a different type of wood. I would also try taking readings at 10g intervals instead of 100g. ...read more.

This is a well written report on an investigation.
1. The background section is very concise and well researched.
2. The preliminary results is relevant to set up the investigation.
3. The method and results are well structured.
4. The analysis section is well written but brief.
5. The evaluation contains good suggestions but the language used is not as concise as previously.
**** (4 stars)