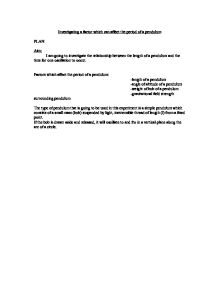 Investigating a factor which can affect the period of a pendulum.

Investigating a factor which can affect the period of a pendulum PLAN Aim: I am going to investigate the relationship between the length of a pendulum and the time for one oscillation to occur. Factors which affect the period of a pendulum: -length of a pendulum -angle of altitude of a pendulum -weight of bob of a pendulum -gravitational field strength surrounding pendulum The type of pendulum that is going to be used in this experiment is a simple pendulum which consists of a small mass (bob) suspended by light, inextensible thread of length (l) from a fixed point. If the bob is drawn aside and released, it will oscillate to and fro in a vertical plane along the arc of a circle. Variables: What will be altered or kept the same during the experiment. Variables table: Dependent variable Value How value will be measured 1 Period time for 10 oscillations � 10 digital stop clock 3 repeats for each length Independent variable Length 0.1 to 0.8 metres with 10cm intervals meter ruler Controlled variables Size of swing 30� protractor Mass of bob 500g 5 x 100g weights gravity 10N/kg Prediction: I predict that the length of the pendulum will have an effect on the period . The longer the length of the pendulum, the longer the period. This is because, based on a theory I found in an A Level text book, the pendulum is able to work when its bob is suspended at a higher angle than the one it is when at rest, vertically suspended. ...read more.

Precise uses of measurement will be used to ensure that the variables change/remaine constant during the experiment: -Using a metre ruler to measure the pendulum's length. -Using a protractor to measure the pendulum's angle of altitude -Using a stop clock to measure the pendulum's period(s) to 2 decimal places of a second. -Using 5 x 100g masses to measure the pendulum's bob of 500g. Not many safety risks were involved, although the following should be considered to provide a safe test: -The angle of altitude was kept to a minimum of 30� to avoid large swings leading the bob to come into contact with anything and causing damage. Preliminary work: We researched our investigation before carrying out the experiment by looking at theories and equations in A level Physics text books. We also carried out a very short experiment with a pendulum of length 20cm and of 50cm to see if there was a big enough difference to get varied results for the more detailed experiment. Fair test: To ensure accurate and reliable results, the following will be considered: -So that the velocity of the swing is not affected, we will make sure that there are no obstructions to the swing of the pendulum. -The interval between the string's length will increase by only 10cm each time; this will help prove a clear pattern in the results. -The angle of altitude will remain as 30� throughout, ensuring there is no change in the forces acting upon the pendulum. ...read more.

Excluding human error, the procedure and formula exercised were regarded as reliable and so, I can support that my evidence concludes that one factor that affects the period of a simple pendulum is its length. When the length increases, the period increases; when the length decreases, the period decreases. The procedure and formula exercised was understandable and straightforward; however certain improvements could be made to make results more efficient by being more reliable. More repeats could have been applied to the method to obtain a more specific average. The pendulum's length was in the form of string, as a result of having 500g suspended on it, the string could have accumulated extra length by being stretched; this could have been improved by using stronger, more rigid material as the pendulum's length. When measuring the length of a pendulum, instead of guessing where the end of the bob is against the metre ruler, the ruler could have been placed level with the point of suspension and a set square placed along it, touching the bottom of the pendulum to improve accurate readings. To extend this investigation, I would further explore the relationship between mass and/or angle of altitude and a pendulum's period. Also, how the pendulum differs when its factors are affected by a different gravitational field strength, not 9.8 Newtons per kg. All these different relationships would help provide a deeper understanding of factors that affect a pendulum and so, I would be able to provide additional evidence to support my conclusion and scientific theory. ...read more.

This is a good attempt at a report that shows promise:
1. The structure is adequate but could be improved by including the correct information under the right subheadings.
2. The background section is well researched and the calculations relevant.
3. The report is missing the data and graph.
4. The conclusion is very brief and does not use any data to back up the claim.
5. The evaluation is the strongest section and includes a good level of detail and shows good understanding of scientific processes.
6. Do not use running commentary paragraphs. Use the structure of the report to lead the reader through.
*** (3 stars)